(CNN) — Shanesha Taylor walked out of a job interview on March 20 at a Scottsdale, Arizona, insurance company feeling like her luck was about to change.

After months of fruitless job searching and moving her three children from one home to another, she was optimistic that she had found not just a job, but a career that would ground her family. The interview went well, lasting longer than expected. The 35-year-old single mother felt like she had the job “in the bag.”

All that changed in an instant as she walked out to the parking lot and saw police around her Dodge Durango, where she had left her two sons during her hourlong job interview. A woman on her lunch break had called 911 after hearing a child crying in the hot car. 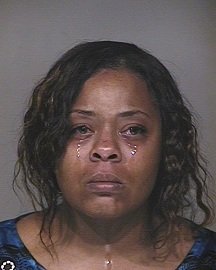 “I felt lost at that moment, like everything I had built myself up for, everything I was trying to do, had fallen apart,” she said. “It went from how am I going to provide for my family to what’s going to happen to my family?”

She was arrested on the spot and held in jail for 10 days on two counts of felony child abuse, losing custody of her three children. Her tear-stained face in a mugshot struck a chord among sympathizers nationwide, who thought the actions against her were unjustified given the circumstances.

Supporters coalesced on social media, starting a fundraising campaign to cover her $9,000 bail. It raised more than $110,000 over two months. An online petition asking Maricopa County Attorney Bill Montgomery to dismiss the charges drew more than 58,000 signatures. At one point #isupportshanesha was a trending topic on Twitter.

To many she represented the plight of single and underemployed parents who face tough decisions each day related to child care. Others saw it as evidence that the criminal justice system metes out harsher penalties to African-Americans than other racial groups.

“There’s a racial component in this case that can’t be ignored,” said social justice activist Mariame Kaba, who started the online petition. She also contributed to efforts to keep the case in the public eye through social media and her blog, Prison Culture.

Montgomery said he was unmoved by the public outcry. But further discussion with Taylor’s lawyer led to an outcome with which both sides say they are satisfied.

Montgomery agreed to dismiss child abuse charges against Taylor if she successfully completes 25 hours of parenting classes and establishes education and child care trust fund accounts for her children. She also has to complete a substance abuse treatment program — a standard provision in these types of cases to ensure the children’s safety, a county attorney spokesperson said — even though she has no drug-related criminal record.

Taylor agreed to the conditional plea deal in a July 24 hearing and began her parenting classes in August. The trust funds will be established through donations from the public.

“I realize I made a mistake, but I’m grateful that they took a look at my situation and what I was intending to do that day,” Taylor said.

Taylor’s lawyer, Benjamin Taylor II (no relation), said the resolution shows that “justice can be merciful.” Legal analysts and activists say the tentative resolution of Taylor’s case highlights the fluid line between bad parenting and criminal behavior in a moment when several cases involving child welfare are making headlines.

Taylor said she left her children, ages 6 months and 2 years, in the car “in desperation” after her child care arrangement fell through the morning of the interview. With less than two hours to spare, she found herself faced with two bad options.

Parents across the country face these sorts of tough choices each day with similar consequences.

Florida mother Nicole Gainey was arrested on a felony child neglect charge in July after police found her 7-year-old son alone in a park less than a mile from her home. Online court records indicate she is still awaiting a preliminary hearing. South Carolina mother Debra Harrell also was arrested in July for leaving her 9-year-old daughter alone in a park while she went to work. That case is pending after she waived her right to a preliminary hearing on one count of unlawful neglect of a child. Strangers also have come to her aid to raise funds online.

Occasionally, our worst fears are realized. On Monday a 9-year-old Michigan boy was fatally stabbed in a playground, allegedly by a 12-year-old. Local authorities say neither child’s parents were present. Jamarion Lawhorn’s lawyer entered a not guilty plea on his behalf Tuesday on one count of murder.

But a wide range of possibilities falls between murder and a case like Taylor’s, leaving law enforcement and the justice system to determine the level of criminal intent at hand.

Defense lawyer Mark O’Mara worked with Taylor’s lawyer to help handle media attention. In a CNN Opinion column, he said his involvement in the case opened his eyes to the number of cases where parents are being arrested for behavior that, “just a generation ago, may have raised eyebrows but would certainly not have risen to the level of criminal charges.”

‘Serious risk’ in the eye of the beholder

There is no clear line because “parenting is a constant series of decision-making and judgment calls,” said New York University family law professor Martin Guggenheim. Parents, especially in the United States, have a lot of freedom when it comes to child-rearing decisions.

“What we’re not allowed to do is expose our children to a serious risk of harm,” he said.

Often, “serious risk” is in the eye of the beholder.

Instead of having a set of rules to follow, parents are free to make the best calls possible given their circumstances, knowing that they run the risk of losing their children if someone — a stranger, law enforcement or the courts — finds those decisions unreasonable after the fact.

“That’s the way we do it,” Guggenheim said. “What we ought to really be interested in is if this is a mother whom we can trust to raise children well. In this case the answer is unquestionably yes.”

Montgomery said his office had an obligation to investigate due to the circumstances under which police were called to the scene. Someone parked near Taylor’s vehicle called 911 to report a crying child inside the car, according to a police report. Responding officers found the front door unlocked, the windows rolled down about an inch, and keys in the ignition. Taylor’s two sons were “sweating profusely” in the backseat and the 6-month-old was “crying hysterically.” The children were taken to the hospital and later reported to have “no medical issues.”

When further investigation revealed the situation “was the exception and not the rule” for how Taylor cared for her children, “we were able to look at this as a unique circumstance” and consider a wide range of alternatives to resolve the case, Montgomery said.

“It’s always our concern in these types of cases to address underlying circumstances to see the risk going forward.”

Taylor’s lack of a criminal record or contact with law enforcement related to her children weighed heavily in her favor, he said, along with circumstances showing she was trying to find a job. Knowing that a felony record would seriously hinder her job prospects, Montgomery said he was inclined to give her an opportunity to prove she is a responsible parent.

Extreme cases in which defendants face serious sanctions tend to make headlines, Montgomery said. In reality, his office is constantly seeking alternatives to incarceration — probation, deferred prosecution and open-ended sentencing — especially for first- and second-time nonviolent offenders like Taylor in situations where no one was seriously injured. Thousands of child abuse cases result in deferred prosecutions each year, making Taylor’s case fairly typical, he said. What makes it unique is the availability of funds from the online campaign to create trust funds.

“I have every expectation that she’s going to be successful,” Montgomery said of the conditional plea deal.

“We have enough violent and repeat offenders to keep us busy. If we can identify those who do not pose an ongoing threat to the community we’re more than happy to give them the opportunity to demonstrate that and move on.”

He resists the characterization of the agreement as lenient, and rejects allegations that race played a role in the case.

“As prosecutors we seek to arrive at a just result in resolving a case. Consequently, we do not weigh whether a given outcome is lenient, merciful or a reprieve, but whether it is just,” he said. “The decision to prosecute is not based on a person’s race, gender or ethnicity but on their underlying conduct and whether there is objective evidence to support a criminal charge. It is a hackneyed criticism that prosecutors overcharge.”

Many still believe that Taylor never should have faced criminal charges. The passerby was right to call 911 and police were right to investigate. But the case should not have ended up in criminal court, Guggenheim said.

Instead, police could have left her with a fine or a warning, given the circumstances, said Kaba, who started the Change.org petition asking to drop the charges. For her, Taylor is another victim of what research suggests is the tendency to charge African-Americans with crimes more often than other racial groups.

“Black women are completely seen as potential bad mothers all the time. You have to prove you’re not a bad mother. White women get a benefit of the doubt,” she said.

Taylor, however, bears no ill will toward the person who called 911 or law enforcement prosecutors. She is grateful the stranger acted on behalf of her children and she is grateful for the possibility of her charges being dropped.

Right now, she is focused on getting back custody of her children, who have been staying with relatives since her arrest. She did not get the job she interviewed for in March, but she looks forward to continuing her job search without felonies hanging over her head.

She hopes the incident raises awareness of the bind single parents find themselves in to find child care and encourages policymakers to come up with solutions.

“They tell you to do right by your children, get a job and depend on the government when you need help. But the reality of the situation is there are so many government programs whose funds are being cut or you’re told you don’t qualify for them. You could be in the lowest of stations and still not qualify.”

Her advice? Look to nonprofits for help.

“What I’ve found is the nonprofits are picking up where government has gaps. The problem is everything is so segmented, but it’s up to you to figure it out so you don’t have to make those tough decisions.”