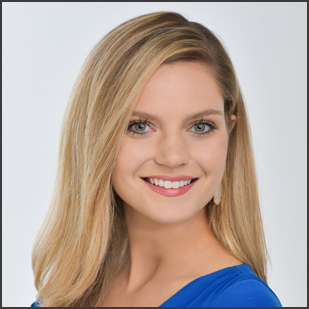 Brigit is excited to call St. Louis home after already being a Missouri resident for the past six years. While obtaining her bachelor’s degree of atmospheric science from the University of Missouri, Brigit worked at the ABC affiliate (KMIZ) in Columbia, working behind the scenes as a production assistant. Upon graduation, she was promoted to the morning meteorologist position at KMIZ.

Along with studying at Mizzou, Brigit was able to study abroad at the University of Reading in England, which is known worldwide for it’s top-ranked meteorology program.

Being from Nebraska, Brigit has dealt with severe weather her entire life. At a young age, she remembers her mom telling her about the 1975 tornado that hit Omaha and destroyed the street of their family business. Ever since then, she has always had a curiosity for severe weather.

When Brigit is not forecasting she loves to spend time with friends, cook, visit family in Omaha, travel, and take her dog Bentley on walks.