MIAMI, May 28, 2022 /PRNewswire/ -- The National Salute to America's Heroes presented by Hyundai returns to Miami Beach this Memorial Day weekend May 28-29, 2022. Now in its sixth year, the patriotic two-day event is designed to pay tribute and honor military and first responders. The event combines the Hyundai Air & Sea Show with the Music Explosion presented by Hyundai and a display village with interactive exhibits and simulators and family-friendly entertainment. 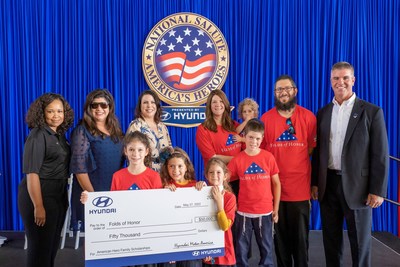 For the second consecutive year with the event, Hyundai will be donating $50,000 to Folds of Honor to provide scholarships to spouses and children of America's fallen and disabled service members.

"We've been a proud partner of the National Salute to America's Heroes since its debut in 2017," said Angela Zepeda, chief marketing officer, Hyundai Motor America. "Everyone at Hyundai shares the utmost respect and appreciation for the contributions of the men and women in our nation's armed services. This partnership is part of Hyundai's long-term commitment to supporting the U.S. military and honoring America's greatest heroes."

"Thanks to the support of Hyundai, we are able to create a family-friendly event that honors and pays its respects to the men and women of our military and first responders," said Mickey Markoff, executive producer, Hyundai Air & Sea Show. "There is no better time than Memorial Day weekend to pay tribute to our military, first responders, and those who have paid the ultimate sacrifice on behalf of our freedom."

The National Salute to America's Heroes is anchored by the Hyundai Air & Sea Show, The Greatest Show Above the Earth™, showcasing the men, women, technology and equipment of all five branches of the U.S. military, police, firefighter and first responder agencies. The Hyundai Air & Sea Show begins each day at 11 a.m. with sea demonstrations by professional jet skiers, ThunderCats boat races and the Cigarette Offshore Powerboat Racing Demonstration which will showcase 10 state-of-the-art cigarette boats. After the sea portion, look to the sky to witness state-of-the-art U.S. military technology including parachute teams, jet demonstrations, and search and rescue exercises.

The Memorial Day weekend event also includes the Music Explosion presented by Hyundai on the sands of Miami Beach featuring the international rock band, 3 Doors Down, taking the stage at 8pm on Saturday, May 28. The Music Explosion kicks off at 5:30 p.m. with the U.S. Army's: "As You Were" Band and the U.S. Air Force "Max Impact" Band. A special night pyro-parachute demonstration by the U.S. Army Golden Knights Parachute Team will kick off the spectacular Florida Restaurant and Lodging Association fireworks extravaganza following the concert.

Experiential activations are centered at Lummus Park, spanning more than four city blocks on 11th and 14th Streets on Ocean Drive and will include the Hyundai Hangar, a patriotically inspired consumer lounge honoring the military and first responders. The Hyundai Hangar, located between 12th and 13th Street, will feature a collaborative chalkboard memorial wall for messages to family and friends who have served and other interactive activities and themed giveaways. Hyundai will also have several other activations communicating its built in the U.S. story and eight vehicle displays staged throughout the area featuring a specially-wrapped Hyundai Tucson, Santa Cruz , Santa Fe and Palisade honoring the branches of the military and first responders.

The National Salute to America's Heroes presented by Hyundai debuted in 2017 along the shores of Miami Beach to a daily crowd of more than 100,000 spectators. The 2022 nationally recognized event is expected to be even more thrilling, with a larger spectator viewing area and a free-to-the-public Display Village, Action Zone and Kids Zone, all located between 11th and 14th Streets along Ocean Drive, which will include interactive displays from military service branches and corporate partners. For additional information, please visit https://usasalute.com/.

Hyundai shows its support for the U.S. Military through a dedicated internal employee resource group called Stars and Stripes. In addition, Hyundai's Veteran Employment Transition program actively recruits military veterans for Hyundai dealership parts and service positions. The success of this program and others have led to Hyundai being named a 2022 VETS Indexes Recognized Employer, a 2022 Military Friendly® Employer from VIQTORY (an honor Hyundai has received nine times) and has been recognized as being one of the Best of the Best Top Veteran-Friendly Companies by U.S. Veterans Magazine.

Hyundai Motor America focuses on 'Progress for Humanity' and smart mobility solutions. Hyundai offers U.S. consumers a technology-rich lineup of cars, SUVs, and electrified vehicles. Our 820 dealers sold more than 738,000 vehicles in the U.S. in 2021, and nearly half were built at Hyundai Motor Manufacturing Alabama. For more information, visit www.HyundaiNews.com.