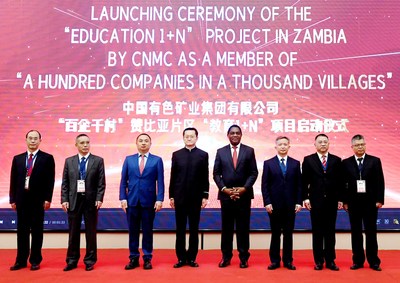 On the event, the "Blue Book of Power of State-owned Companies - A Hundred Companies in a Thousand Villages" was officially released to the public, and CNMC's "Building a demonstration project of vocational education 'Going global' and Deepening China-Africa Cooperation in the Construction of 'Belt and Road'" was evaluated as one of the top ten classic comprehensive cases of "A Hundred Companies in a Thousand Villages", and its "Green Development along the Congo River - Ecological Protection of the Deziwa Tailings Reservoir of CNMC" was selected as one of 70 special cases. Kong Fanxin, Deputy Secretary of the Party Committee of CNMC, has delivered a keynote speech entitled "CNMC Practice of Contributing to Forge the 'China-Africa Community with a Shared Future' in the New Era".

The campaign "A Hundred Companies in a Thousand Villages" was announced by Chinese President Xi Jinping in his keynote speech at the opening ceremony of the 8th Ministerial Conference of the Forum on China-Africa Cooperation (FOCAC): "Supporting the Alliance of Chinese Business in Africa for Social Responsibilities (ACBASR) to launch the 'A Hundred Companies in a Thousand Villages' campaign", which is also included in the "Nine Projects of Poverty Alleviation and Agricultural Benefit Projects of China-Africa Cooperation".

The SINO-ZAM Vocational College of Science and Technology, which was awarded as one of the top ten classic comprehensive cases of "A Hundred Companies in a Thousand Villages" this time, is an important starting point for CMC to promote pragmatic cooperation between China and Africa. In April 2019, with the support of the Ministry of Education of China and the Ministry of Higher Education of Zambia, the SINO-ZAM Vocational College of Science and Technology was established, marking China's vocational education teaching standards going global and entering into the national education system of a sovereign country for the first time, filling the gap of national vocational education teaching standards in Zambia. Since the official enrollment, the college has carried out 50 sessions of skills training and Chinese language training for industrial use among 1,000 students, and sent more than 150 Zambian students to China for exchange and study. This case of promoting the "Going Global" of Chinese vocational education was reported by the People's Daily, and the iconic photos of the vocational college were selected in the "Reading Materials for Students of Xi Jinping's Thought of Socialism with Chinese Characteristics in the New Era".

CNMC has implemented President Xi Jinping's concept of Building a "Community with a Shared Future for Mankind" in all aspects of business development, and has been operated in Africa for 24 years, adhering to the concept of sincerity and sincerity, and has donated more than 200 million RMB to carry out public welfare undertakings in Zambia and the Democratic Republic of the Congo. Since joining the ACBASR and being elected as the vice chairman unit of the executive committee, CNMC has actively responded to the advocacy of the ACBASR, deeply participated in the "Eight Actions" of China-Africa pragmatic cooperation, actively promoted the "Nine Projects", and established a positive image of state-owned companies in the implementation of "Going-Out" strategy. 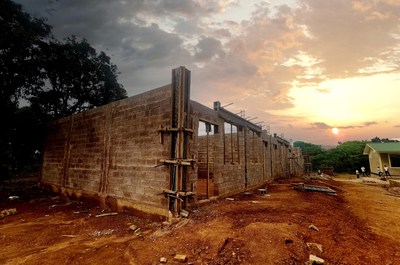