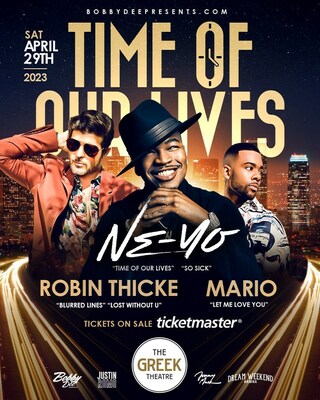 NE-YO has sold a cumulative 20+ million albums worldwide. The Motown Records/Compound Entertainment recording artist has won three GRAMMY awards and been honored with a total of 14 nominations. His first single, 2005's "So Sick," hit No. 1 on the Billboard Hot 100, and was certified quadruple Platinum. Since then, he has racked up a collection of hit singles including "Sexy Love," "Closer," "Because of You," "Miss Independent" and "Push Back" featuring Bebe Rexha and Stefflon Don. Three of his albums have entered SoundScan's Top Current Albums chart at No. 1.

Robin Thicke has established himself as one of the most respected singer-songwriters in soul and R&B music today. The musician, composer and actor, released his critically acclaimed debut album, A Beautiful World in 2003 under the name "Thicke." Soon after, he came out with his breakthrough second release, 2006's The Evolution Of Robin Thicke. Now on the way to double-platinum status, Evolution's mega hit "Lost Without U" became the #1 most played song in Urban Adult Contemporary BDS and topped four Billboard charts simultaneously.

Mario is the independent R&B music industry magnate and Grammy-nominee behind four LPs that reached the top 25 of the Billboard 200 albums chart, including his self-titled breakthrough debut. Mario, the album, reached No. 9 on the Billboard 200, and scored the star his first-ever fan-favorite top 5 hit on the Billboard Hot 100 chart with his heartwarming Biz Markie infused "Just a Friend 2002" — which continuously shines through today's growing streaming era, amassing more than 92.6 million on-demand streams to date.

Bobby Dee Presents was founded in 1987 by Bobby Dee Sr. with a vision to serve niche markets nationwide. Bringing artists, fans, and venues together to produce sold-out shows year after year. Bobby Dee Presents works to bring your favorite artists to a venue near you.