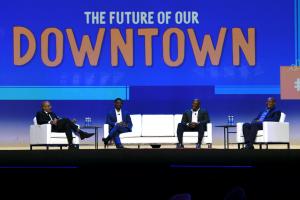 Larry Brinker Jr. joined other Detroit community leaders on the panel “Attracting Residents, Visitors, and Tenants Through Amenities and Policies.”

It’s increasingly important that Detroit and its surrounding communities remain a focus in growth and development planning and we at Brinker are committed to keeping this community a priority.”
— Larry Brinker Jr., CEO of Brinker

“It was my honor to be able to join with the others on the panel who have done so much for Detroit,” said Larry Brinker Jr. “It’s increasingly important that Detroit and its surrounding communities remain a focus in growth and development planning and we at Brinker are committed to keeping this community a priority. These conversations and events are important in order to speak about what’s been done and discuss plans for the future, to keep positive growth at the forefront of our minds.”

While much of the conversation centered around how development in Detroit offers a chance to positively impact those who live there, the group thoroughly discussed the question of how to continue attracting visitors and businesses in a post-pandemic era, particularly hospitality and retail tenants. You can view the entire discussion here.

Brinker is a second-generation entrepreneur who has been building a legacy by expanding his father’s construction company, Brinker Group, to include real estate development. This expansion not only further grows Brinker Group’s status as one of Detroit’s largest construction companies, but it also provides more opportunities to change lives in the region. A great example of this is the redevelopment of the United Artists Building to 148 new apartments, which will offer families in the city of Detroit affordable housing options.

About Brinker
Brinker is a family of five companies that provides the complete range of commercial construction services from construction management, general contracting, exterior and interior carpentry to glass and glazing, carpet and flooring, and electrical. Founded in Detroit in 1989, when others left the city because times were tough, they doubled down and stayed put becoming a major player in the transformation of Detroit. Throughout its growth and acquisitions, they’ve stood for quality, integrity, and a different way of doing business. Today, they continue to raise the bar for the depth and breadth of expertise, services, and efficiencies that one organization can provide to clients. The family of five companies that make up Brinker are: L.S. Brinker, Brinker Team Construction, Universal Glass & Metals, City Carpet & Flooring, and Edgewood Electric. For more information, visit www.brinkergroup.com

For inquiries or corrections to Press Releases, please reach out to EIN Presswire.
✕
× Close Ad