The warmth and joy of the holiday season will be celebrated for 45 days this year at World Wide Technology Raceway in Madison, Illinois. WonderLight’s Christmas, the largest synchronized holiday light show in the St. Louis area, will debut on Friday, November 20, and will run until Sunday, January 3, 2021. The show will be open nightly, including holidays (Thanksgiving, Christmas Eve, Christmas, New Year’s Eve and New Year’s Day).

Tickets are $7 per person. A carload pass is also available for $30 (up to seven passengers). Group pricing can be found at Wonderlight Christmas. For a contactless admission process, guests may purchase tickets online in advance. 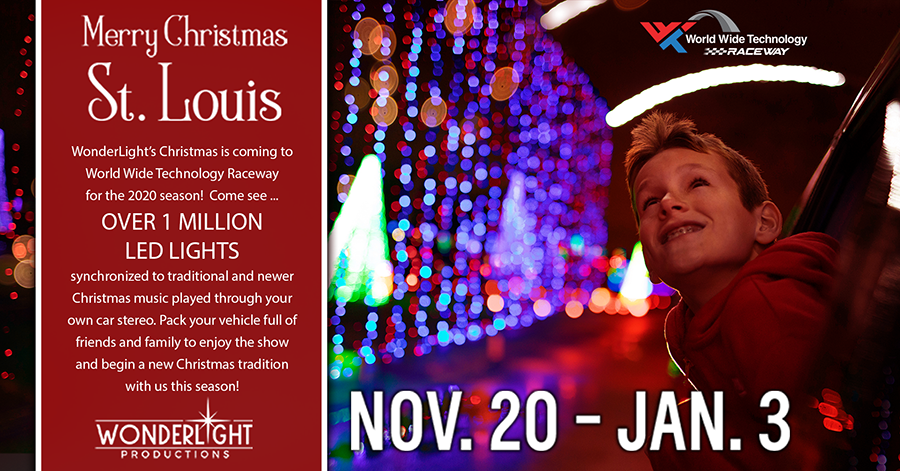 “Our show has the warm, traditional feel of Christmas, but it’s incredibly unique in the fact that it’s fully synchronized to music. This alone sets it apart from all of the other holiday experiences in the St. Louis area,” said Emily Fleenor of WonderLight Productions. “Instead of having animated displays, like a snowman waving an arm or tipping his hat, we have more than 1-million lights each moving in sync with crowd-favorite Christmas music. In lieu of cartoon-like imagery and lighted signs, our show features things like floating snowflakes, shooting stars, giant dancing trees, and five immersive tunnels of lights.

“The route is two miles long with over 50 minutes of music, so it’s a massive production. Our traditional string lights — brought to life by music — feel magical in a way that captivates children and adults alike.”

Music will include a mix of traditional Christmas favorites as well as songs by contemporary artists. Families will listen to the music on their car’s radio as they navigate the display route, which follows the recently expanded 2.0 mile road course at World Wide Technology Raceway.

The WonderLight family has been in the light show business for nearly a decade. They are based in Bluff City, TN. In addition to the inaugural St. Louis show in 2020, WonderLight also operates a highly successful Christmas light display in Columbus, Ohio.

Santa’s Magical Kingdom in Eureka is open EVERY night, November 20, 2020 – January 10, 2021. Drive through the Midwest's most spectacular holiday light display filled with animated scenes, dazzling special effects, and millions of shimmering lights – this is the whimsical version of over 4 million lights. It’s open every night through January 10th including Thanksgiving, Christmas Eve, Christmas and New Year’s Eve to help you family make amazing holiday memories!

Admission fee is by the carload, one price entertains the entire family. If you bring in a toy to donate, you can save $5.00 on your admission price! Donated toys will support Catholic Charities of St. Louis agencies.

Home for the Holidays Sweepstakes

FOX 2 wants to recognize the great contributions women have made to our nation and local communities. Remarkable Women is part of a nationwide Nexstar Media initiative to honor the influence that women have had on public policy, social progress and the quality of life.

During the month of March which is Women's History Month, FOX 2 will highlight four local women who inspire, lead and forge the way for other women. It’s not just about one day or one month — it’s about what they do, day-in and day-out.

Missouri state rep. from St. Louis volunteers to hand out Thanksgiving meals to the homeless

Live updates: What does Black Friday look like during COVID-19

Pedestrian hit and killed on Missouri 141

Police arrive at crash with no driver

Missouri state rep. from St. Louis volunteers to hand out Thanksgiving meals to the homeless

Live updates: What does Black Friday look like during COVID-19