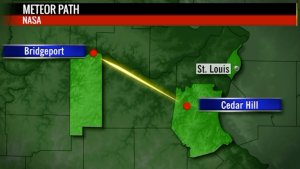 ST. LOUIS, Mo. — A $25,000 reward is being offered by the Maine Mineral and Gem Museum for part of a meteorite that was seen streaking past St. Louis Monday night. The prize goes to the person to bring in the first piece of the meteorite that weighs at least one-kilogram. That is just over two pounds of space rock.

The Maine Mineral and Gem Museum will be putting it in a place of honor in the museum. The grand opening is on December 12, 2019.

"It's an exciting opportunity to have a sample from a fireball seen one month before our official opening and we wish to enlist the public's assistance. Preliminary reports indicate a fall site approximately 50 kilometers northeast of Columbia," writes Museum Director Barbra Barrett.

NASA says a meteor seen streaking through the sky behind the Gateway Arch in St. Louis was a basketball-size hunk of rock that broke off from an asteroid belt between Mars and Jupiter.

The St. Louis Post-Dispatch reports that experts used hundreds of eyewitness accounts from as far away as South Dakota and Minnesota along with two videos to calculate information about the meteor.

They determined that the approximately 220-pound (98-killogram) rock traveled through the sky Monday night at 33,500 mph, causing a sonic boom. A NASA weather satellite helped the agency confirm it was brighter than Venus in the sky, making it a fireball.

Bill Cooke, of the NASA Meteoroid Environments Office in Huntsville, Alabama, says it broke into pieces 12 miles above the ground.

For prospectors hoping to find a fragment somewhere in the Show Me State? Will Snyder, manager of the James S. McDonnell Planetarium at the St. Louis Science Center says you’re probably out of luck.

“Because when you see that bright flash, maybe you heard the boom. You think that had to be something huge up in the sky. Really, we’re talking something for pretty small. Loose meteors or shooting stars that you see are just barely a speck of dust. Little, tiny pieces of debris left in space from a comet or an asteroid passing through our atmosphere with something like we saw last night, a little bit larger to cause that big fireball. Maybe even something that would fit on the palm of my hand, so we’re still talking something pretty small.”

Cruise line operator Carnival Corp. revealed on Tuesday it still has 6,000 passengers on its ships across the globe, with some of those passengers not expected to disembark until late April.

"Substantially all our ships have disembarked their passengers. There are approximately 6,000 passengers onboard ships still at sea that are expected to disembark their passengers by the end of April," Carnival Corp. said in a filing to the U.S. Securities and Exchange Commission.

NORFOLK, Va. (WAVY) -- A Zoom meeting between a Norfolk, Virginia private school teacher and her students was hijacked by someone who shared inappropriate materials with the class.

Many teachers have switched to digital instruction in response to schools shutting down during the coronavirus pandemic. Gov. Northam announced that all schools in Virginia would remain closed for the rest of the school year. But learning has continued, just virtually.

CARBONDALE, Ill. (AP) - Southern Illinois University has suspended the Delta Chi fraternity for violating the chancellor’s order banning in-person activities to slow the spread of COVID-19. Carbondale police over the past weekend responded to a house party hosted by Delta Chi which violated an administrative directive issued March 27 by interim Chancellor John Dunn and dean of students Jennifer Johns-Hall. The directive ordered compliance with Illinois Department of Public Health protocols requiring state residents to stay home except for essential trips for groceries or medicine. Gatherings of 10 or more people are also banned.

Coronavirus isolation could lead to other health problems

Coronavirus isolation could lead to other health problems