ST. LOUIS (KTVI) – The woman shot in an attempted robbery at a south St. Louis bar has died, and two of the suspects accused in her shooting are now facing charges.  The victim, a 63-year-old, has not yet been identified.

The two men charged in the case are Derreaun Davis, of Goodfellow Boulevard in St. Louis and Corey Wade, 29, of Davison St. in St. Louis. Both face several charges relating to the robbery and assault of the victims.  No murder charges have been filed yet, because the victim passed away late in the day, but amended charges are expected against both men.

The two suspects and a third man who is still on the run, allegedly stormed into the Pooh’s Corner Bar on Virginia Ave. in south city late Tuesday night.

Police say they entered the bar wearing bandanas on their faces, in single file.  Wade allegedly fired a shot into the air and announced a robbery.  The bar’s owner says one of the men then pointed a gun at the 63-year-old woman’s head and pulled the trigger.

It was then that one of the bar’s customers, a 65-year-old former St. Louis police officer, pulled a gun of his own and started shooting.  He hit Wade in the eye with a shot.  Police say he ran for the door but collapsed.  He was eventually taken to the hospital under the watch of police detectives.

The customer with the gun was shot in the leg, and two other patrons of the bar were hit as well, though their wounds are described as less serious.

The second suspect, Davis, escaped the scene with the third gunman.  Police say the two ditched the stolen car they took off in at another location.  Davis went to the hospital seeking treatment for his gunshot wound and was arrested when police realized he was one of the people they were looking for.  The third suspect is still on the run.

Neighbors say it was hard to believe the men would try to rob Pooh’s Corner.  The bar is well-known in the area as a hangout for police officers.

“It’s a place you want to go drinking,” Rick Reed said, “because when all the cops are sitting there with guns, you feel pretty safe, or I do anyway.”

Barry Murphy, another neighbor, said, “You’re wondering, what exactly are they thinking?  Do we need to put a sign on it, ‘Do not enter. Cops bar?  This is where we hang.’”

“You would expect anyone whose going to commit a robbery to find someone whose  alone or by themselves, or go to a business where there’s very few people there where they can quickly intimidate people.”

The owner tells FOX 2 this is the third attempted robbery of Pooh’s Corner since 1995.  In each case, at least one suspect has been shot by someone inside the bar.  In fact, the man who shot the two suspects Tuesday was the bartender the last time the placed was robbed, in 2008.  He reportedly was the one who shot the suspect in that robbery, too.

Homicide detectives are handling this case due to the extent of the woman’s injuries. 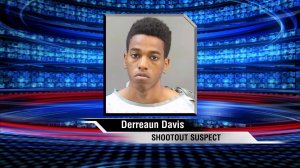 Robbery attempt happened just before 11pm last night. 4 of the ppl who were shot were customers; 2 were suspects.#stl pic.twitter.com/NfISRxM4PC

Owner:woman shot in head is about 63 yrs old. Her husband was sitting right next to her. Woman in critical condition. pic.twitter.com/MZWWim75TI

Bar owner:3 males came in/told everyone to get down. We're told suspect put gun to female customer's head/shot her. pic.twitter.com/sjFH0c3ToS

HARRISONVILLE, Mo. -- Kylr Yust, a Kansas City man, has been recommended a sentence of life and 15 years for the deaths of Jessica Runions and Kara Kopetsky in Missouri.

Under the protection act, it is illegal to engage in deceptive marketing related to the treatment, cure, prevention, mitigation, or diagnosis of COVID–19, or any government benefit related to the virus. The law also authorizes the FTC to seek civil monetary penalties for first-time violations, something not normally available under the FTC Act.

ST. LOUIS, Mo. - An invasive species of worm is wriggling its way into the Midwest. "Jumping Worms" (Amynthas spp) thrash wildly when handled, are 4 to 8 inches long, move quickly like a snake, and can shed their tails when threatened.

The Jumping Worms originally come from Asia and were officially found in the Midwest by the University of Wisconsin at Madison in 2013. Researchers have been tracking their movements since then. They may have been brought to the United States as fish bait.

1/3 of Missourians have one dose of COVID vaccine; how your county compares

Can my employer legally ask if I received the COVID-19 vaccine?

How voting absentee in Missouri could get easier