Don’t forget to look up to the heavens this weekend.  The winter solstice is just before Christmas this year.  You may see some holiday lights in the sky too.

The upcoming full moon is named the Cold Moon and will be visible during the longest night of the year.   But, the two events don’t perfectly align. The winter solstice falls a day earlier on December 21 and the peak full moon will occur on December 22.  However, to the typical person, it will appear full for several days.

Don’t miss this opportunity to see the full moon and the Ursid meteor shower.  The best time to view the Ursids should be on December 22.  Although, the full moon may make the meteors somewhat more difficult to see.

The American Meteor Society says the Ursids should be visible in the mid-northern hemisphere. At the peak there should be about eleven sporadic meteors per hour during just before dawn as seen in rural areas. Evening rates would be near two per hour. 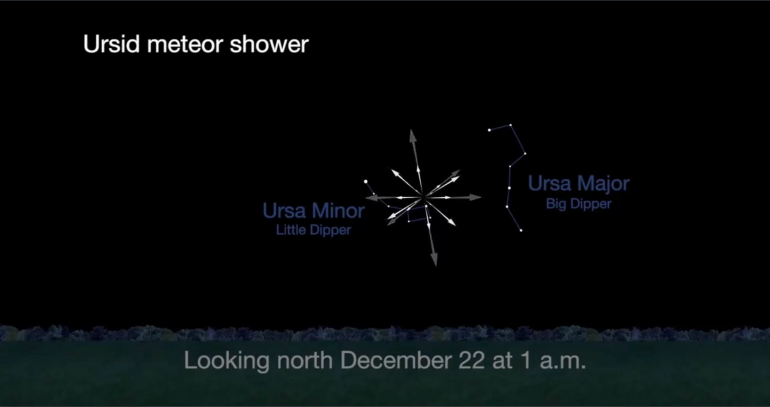 Summer solstice in the Northern Hemisphere occurs on June 20, 21 or 22, when the sun reaches its most northerly point, directly overhead at the Tropic of Cancer (23 degrees 27 minutes north latitude). The summer solstice is the longest day of the year and marks the beginning of summer.

A solstice is different from an equinox, the two times each year when the sun is directly above the Earth’s equator and day and night are of equal length. Equinoxes mark the beginning of spring (March) and fall (September).

Solstice loosely translated in Latin is “sun stands still”. For several days before and after each solstice the sun appears to stand still in the sky, i.e., its noontime elevation does not seem to change from day to day.

Historically, the solstice has been celebrated by numerous cultures around the world. Thousands of people annually celebrate the summer solstice at Stonehenge in Wiltshire, England.

At sunrise at Stonehenge on the longest day of the year, the rising sun appears behind one of the main stones, creating the illusion that the sun is balancing on the stone.

Stonehenge was closed for 16 years after rioting broke out between police and revelers for several years at solstice gatherings. The site was re-opened to the public on solstice in 2000.