Skip to content
Breaking News
Breaking News
Map of St. Louis area COVID-19 cases – MO: 1,064 deaths/ 26,661 cases IL: 7,144 deaths/ 151,767 cases.
This is an archived article and the information in the article may be outdated. Please look at the time stamp on the story to see when it was last updated. 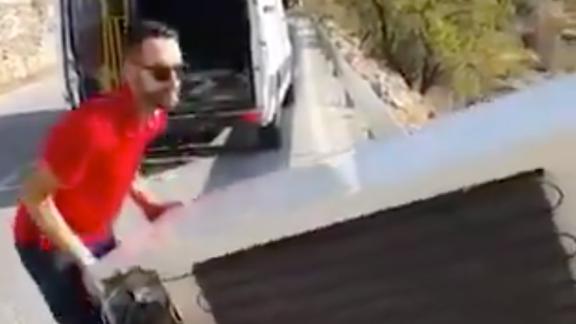 In a seemingly perfect act of justice, a man who was filmed throwing a used refrigerator off a cliff while mocking recycling was told to retrieve it for proper disposal.

Spain’s Guardia Civil police identified the man, who works for a company that distributes domestic appliances, after the video, shot in Almeria region, went viral on social media, according to a press release seen by CNN.

They accompanied him to haul the fridge back up from the ravine in the southern Almeria region, releasing a video of the arduous task.

A court will now decide whether the man will face just an administrative fine or a heftier one under the penal code for “environmental crime”, Luis González, a Guardia Civil spokesman, told CNN.

In the original video, the man can be seen unloading the fridge from a van — its license plate in shot — and dropping it off a steep cliff.

Both the author of the video and the man in question could be heard saying “Recycling…let’s go recycle it!” and “Let’s see how many flips it can do” as the fridge rolls down the rocky slope.

The Guardia Civil is also investigating the company he was working for, after an inspection at their facilities unearthed about 50 washing machines stored in the outer courtyard of a warehouse amid dry vegetation, according to the press release.

The man was not publicly identified and therefore couldn’t be reached by CNN for comment.

WYNNEWOOD, Okla. (KFOR) – Oklahoma State Bureau of Investigation agents are assisting an investigation at The Greater Wynnewood Exotic Animal Park, which was once owned by Joe Exotic.

WASHINGTON – President Trump said Friday that he plans on signing an executive order on immigration that will provide a "road to citizenship" for recipients of Deferred Action for Childhood Arrivals (DACA) program.

Trump told Telemundo's José Díaz-Balart that he would be signing a "big immigration bill" that would involve the so-called Dreamers, immigrants brought to the United States when they were children.

LAS VEGAS (KLAS) -- For the first time in the history of the Jehovah’s Witnesses religious organization, they will be holding their worldwide annual conventions virtually.

Last year, more than 14 million people attended these conventions. In the US alone, Jehovah’s Witnesses typically hold 800 conventions with an attendance of nearly 2 million.

CEO who made racist outburst toward Fresno bartender resigns