ST. PETERS, MO - People flying to and from St. Louis have been noticing something strange from their airplane windows:  the name "Alex” spelled out in massive letters with corn stalks in a farm field near St. Peters.

Fox 2/News 11 found out it was part of a very touching story.

It turns out it’s a great big message for someone who's gone but not forgotten:  Alex Boschert, 27.  He was senselessly murdered at a job site in the spring of 2017.  In the days that followed, the seeds were sown for the remarkable tribute.

It’s hard to notice much from eye-level on Highway B near Highway C outside of St. Peters.

That’s kind of the idea.

Since Alex Boschert no longer walks this ground his brother-in-law put his tribute where he figured Alex could see it now:  coming in high over the Mississippi River.

Alex’s name is planted in corn surrounded by beans to make the letters stand out.

“You look at all these farm fields all over and then you see that – and you’re like – whoah!” Levi Bauer said with a smile.

Bauer worked with his friend Alex at a nearby duck hunting club here before Alex took a job at Laclede Gas in 2013.

“Me and him are real close,” Bauer said.

There’s no sense to made of Alex’s murder.  A stranger, named Clinton Willis, shot and killed Alex and his partner, William Froelich at a job site in St. Louis April 20th.  Willis then killed himself.

Friends and family are putting on a clay-shooting tournament in Old Monroe, October 14th, to benefit Alex’s family.

He left behind a wife, and young son.  She found out she was expecting their second child just after his funeral.  The highlight will be the auctioning of a day of duck hunting on the land that now so boldly bears Alex’s name.

“[His brother-in-law] did something very special for him.  He made this field in his duck lake for him, where he took Alex hunting a lot.  So, I guess he wanted Alex to see from up where he’s at now and look down on it and that’s a special spot,” Bauer said.  “People coming in from the airport say they can see it.  That’s pretty neat.  It looks really cool and it gets their attention, too.”

The October 14th event is at the Blackhawk shooting club, and it’s open to the public. 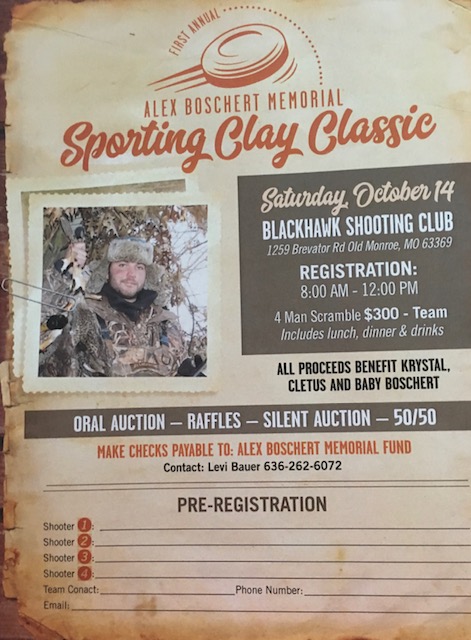 HUNTSVILLE, Ala. (WHNT) -- An Alabama man is walking 1,000 miles to Minnesota, and his destination is the very spot where George Floyd died after a Minnesota police officer kneeled on his neck.

Terry Willis, a business owner, is stepping out hoping for change.

COLUMBIA, Mo. - Two incoming Missouri college students who participated in a video that appeared to mock the killing of George Floyd have withdrawn.

The students were supposed to attend the University of Missouri and Missouri State University in the fall before taking part in a video on social media in which they appear to be simulating the choking of one another. One student is heard saying “I can’t breathe.”

The University of Missouri, which was rocked by racial protests in 2015, promptly began a civil rights investigation, leading one of the students to rescinded her enrollment, the Columbia Daily Tribune reports.

“Given the similarity to the recent death of George Floyd in Minneapolis, the video is both shocking and disturbing,” wrote Mun Choi, president of the University of Missouri System and interim chancellor of MU, in an email to the campus community.

Choi wrote that he has begun meeting with members of Legion of Black Collegians and Missouri Students Association. Black students and alumni at MU have taken to Twitter using the hashtag #BlackatMizzou to write about their negative experiences of being black on campus.

“University leaders and I remain committed to combating discrimination and racism in all its forms,” Choi wrote.

Missouri State University said that in addition to the would-be student who appeared in the video, another student who used an offensive racial slur in a social media post also withdrew, the Springfield News-Leader reports.

“Many others have expressed anger and disbelief at the nature and tone of the hurtful social media posts,” wrote MSU President Clif Smart in a Tuesday blog post.

One man was the beloved owner of a Louisville barbecue restaurant who provided free meals to officers. Another was a man known as “Mr. Indianapolis," a former star football player. Yet another was a federal officer working security during a protest.

They are among those killed as protests have roiled American cities in the week since the death of George Floyd, a black man who pleaded for air as a white Minneapolis officer jammed a knee into his neck.

Police searching for suspects who attempted to break into ATM

Curfews give sweeping powers to cops, but are often flouted

Officer escape with minor injuries after being struck by car