ST. LOUIS COUNTY, MO – A Vice Principal is assaulted in a video that is spreading like wildfire on social media.

According to authorities, the brawl began when a staff member tried to break up a fight between three students.

We are told St. Louis County Police took a 15-year-old and two 16-year-old students into custody.

The video that was posted on SnapChat.

The video was shared thousands of times and the video went viral.

In the video, you see and hear some of the students laughing as the fight broke out and chaos erupted in the cafeteria at Oakville High School.

Fox 2 was told the students tackled the assistant principal to the ground before pulling and kicking him on Monday.

The attack prompting district officials to send a letter to district parents.

St. Louis County Police say since the three students are juveniles, no charges will be filed but the kids could be expelled from school. The case has been turned over to the St. Louis County Family Court. 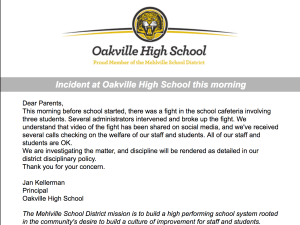 ‘Camelot’ at The Muny for the first time in 13 years

Missouri man loses half his weight