ST. CHARLES, MO (KTVI) - A National Response Team from the Bureau of Alcohol Tobacco and Firearms arrived at Bogey Hills Country Club Monday morning to begin its investigation into a fire that destroyed the main building.

The ATF has national three teams, one is St. Charles another is investigating an apartment fire in Anchorage, Alaska.

The national team is made up of the cream of the crop of fire investigators in the world.

The ATF is the only federal agency that investigates fires and was invited here by state and local officials.

It’s likely the ATF team will be here all week. Just because they’ve been called in by state and local officials does not mean they suspect arson or something suspicious. They were called because they are good at investigating the aftermath of large fires.

“As far as processing the scene, it’s a mammoth undertaking; so we come in with our resources and with a lot of people, we can assemble very quickly,” said John Ham, an ATF spokesman.

What could take a local fire department weeks to investigate the ATF team can look into in only days.

There are about 20 team members. One half of the group interviews possible witnesses in the area and talks with the firefighters who were on hand when Bogey Hills went up in flames.

“What they saw and what they heard when they entered the building, that all is important to us,” Ham said.

"I don’t think it hurts to have everything checked, that way you find the real answers,” she said.

The other half of the ATF national team will sift through the ashes like chemists. Those folks are said to be the cream of the crop in their field.

“We have developed some of the best fire investigators in the world,” Ham said.

The ATF Command Vehicles have everything the team needs.

“We have all of our capabilities just like were sitting behind our desk at an ATF office, all of that is mobile,” Ham said.

Plus, they have cutting edge laboratories.

When called, team members are dispatched from all over the country. When they arrive, everything is on table as far as a cause. Sometimes they don’t find the answer.

“Even with all of our expertise, if we can’t pinpoint the exact cause of the fire, we will call the fire 'undetermined,'” Ham said.

If they do find a cause it will likely be weeks or months before results are known. Some of the folks worked the Ferguson fires after the rioting and the big warehouse fire in San Francisco that killed three dozen people. 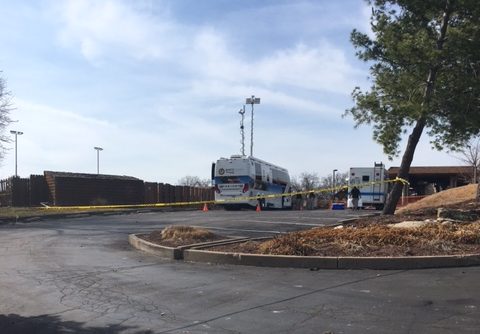 JEFFERSON COUNTY, Mo.- The Jefferson County Health Department has moved the county back into the highest alert status of red. The department says that means there is widespread uncontrolled community transmission in the county.

According to the county's COVID-19 guidance indicator, a red status means a stay-at-home order is necessary. No word from county officials if any change is coming.

KIRKWOOD, Mo. - Fall is now officially here. While you can find mums, gourds, and pumpkin-flavored everything, you’ll have to wait a bit for our leaves to change. Over the coming weeks, trees will all be changing colors and the Missouri Department of Conservation will be tracking it for you.

Shorter days and cooler temperatures are a recipe for leaves to change colors, says Danny Moncheski, a community forester with the Missouri Department of Conservation.

GILLESPIE, Ill. - The Macoupin County Sheriff's Office needs the public's help with a crime involving damage to headstones at Wheeler Cemetary. Five limestone headstones in the rural Gillespie cemetery were found broken in half and some into pieces.

According to Macoupin County Sherrif Shawn Kahl, a cemetery caretaker discovered the damaged headstones. The caretaker said the crime occurred between Sept. 12 and Sept. 13 in the evening hours.

St. Louis only has enough CARES Act grants for 800 businesses – A meeting may change that

You Paid For It: Mother says university didn’t do enough to inform, protect her son from virus