Skip to content
Breaking News
Breaking News
Map of St. Louis area COVID-19 cases – MO: 789deaths/ 14,057 cases IL: 5,736 deaths/ 124,759 cases.
This is an archived article and the information in the article may be outdated. Please look at the time stamp on the story to see when it was last updated.

ST. LOUIS, Mo. — The Backstreet Boys are BACK!  They’re coming to the Enterprise Center during The DNA Tour. The band will play St. Louis on Friday, September 6, 2019. Tickets on sale Wednesday, November 14th at 10am at LiveNation.com.

The Backstreet Boys are back with some major announcements for their fans.

The boy band that rose to fame in the ’90s announced Friday they’re embarking on a world tour this spring and have a new album titled “DNA” dropping on January 25.

“When this group started 26 years ago — and through all the highs and lows of our career — we’ve had to learn it wasn’t about us as individuals but about what’s best for the group,” Howie D said in a statement obtained by CNN.

“The journey is ongoing with us and there is so much left to do,” he said. “We’re living the next chapter that hasn’t been told yet, and that’s exciting.”

The Backstreet Boys’ last studio album, “In a World Like This,” was released in 2013.

But the tour and album weren’t the only surprises. To hold fans over until the album drops, the band released their latest single, “Chances,” along with its music video.

For the past 14 months the group has been hitting the stage for their Las Vegas residency “Backstreet Boys: Larger Than Life.” The residency will end in April.

Tickets for the tour go on sale November 14. 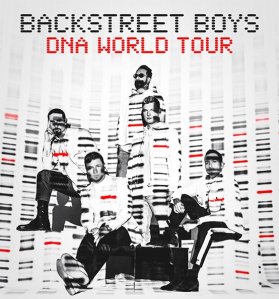