ST. LOUIS, MO (KTVI) – Have you noticed that your breakfast is costing you a little more these days? It’s because there’s a serious bacteria infecting our nation’s orange groves and driving up the cost of orange juice. It’s called Citrus Greening and it could potentially wipe out our nation’s orange supply.

The citrus industry in Florida is a $10.8 billion business that provides 62,000 jobs and helps to define the entire state and across the entire state of Florida oranges are facing one of the most serious citrus diseases in the world. Citrus Greening is a bacteria spread by a tiny insect, the Asian Citrus Psyllid. It sucks the sap from the leaves of the tree, leaving behind the bacteria which starves the tree of all it’s nutrients and there’s no cure!

The disease was first discovered in Florida 10 years ago and now has infected 100 percent of the Florida Orange Groves. Kyle Story, a Florida grower, owns and manages 7,000 acres of orange groves and he says it’s been devastating to the industry, even putting some smaller companies out of business. 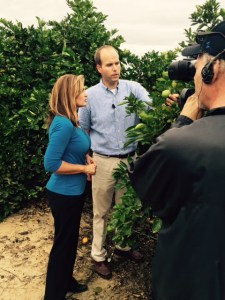 One Reason the bacteria grew out of control is because the symptoms appear many months after the tree is infected, so it’s virtually impossible to control the spread of the disease. Right now, growers are just trying to manage the insects because there’s no way at this point to completely eradicate them. They’ve tried insecticides but had a negative impact on the trees and the honey bee population. So, growers like Kyle are doing the best they can by keeping the trees as healthy as possible. They’re expanding acreage, planting new trees, and tryng to increase the amount of products to keep prices stable. Meanwhile, scientists are working overtime to try to find an answer to the problem.

Nitzan Paldi, CEO of Forrest Innovations, a global company specializing in plant production and protection, opened a branch office at the Danforth Center in St. Louis, Missouri and has been researching the bacteria and working on a possible solution. He’s excited about a breakthrough that looks to be a promising treatment. However, it’s still two to three years out pending regulatory approval.

Meanwhile, Citrus Greening remains a threat to citrus groves across the country. Kyle says for the first time in history, everyone in the industry is fighting for this one common cause with one voice and he says that bodes well for the industry. They can keep fighting if we keep buying. Kyle and Nitzan both say the most important thing we can do to support growers is to buy their product.

"When it came to camping, it was like the heart of where we got our supplies and stuff," said Connor Mooney, member of Boy Scout Troop 426. “I honestly couldn’t believe it.”

CREVE COEUR, Mo. – A local business owner’s random act of kindness leaves a restaurant in disbelief. Employees and guests at Pasta House were shocked by Jim Freeman’s decision to pay it forward.

Freeman, who runs his own contracting company, was picking up his to-go order when he had a feeling. That feeling led him to pay the tab for everyone in the restaurant. Then he went a step further.

St. Louis doctor’s been telling patients to get colonoscopy by age 45 for years, US government now agrees

CrimeStoppers increases reward to $30,000 for info on murders of doctor, 70-year-old woman

Want to own the ‘world’s smallest’ Scrabble game board?

CrimeStoppers increases reward to $30,000 for info on murders of doctor, 70-year-old woman