ST. LOUIS – A feud over MetroLink security has led to one official calling for the resignation of St. Louis County Police Chief Jon Belmar. Vince Schoemehl is chairman of the Bi-State Development Agency’s public safety committee.

“Enough is enough,” said Schoemehl.  “It’s now time for St. Louis County to do something.  They got a police board out there.  I think they ought to fire him or he should resign.”

“We have a $2 billion asset that is wasting away.  It’s costing us almost $5 million a year in lost revenue because people are afraid to get on the train.” said Schoemehl.

The St. Louis Post-Dispatch recently obtained video showing what appeared to be St. Louis County officers covering up a security camera in a break room for the officers.

The video was obtained through a public records request to the Bi-state Development Agency.  The newspaper also reported on accusations officers spent too much time in the break room and not enough time riding trains and walking platforms.

Schoemehl believes the video shows officers getting ready to take a nap and believes the county has failed to provide adequate security under the leadership of Belmar.

The chief said he was aware of only one incident regarding an officer covering up the camera and said that officer said he covered up the camera in order to change clothes in the break room.

“This is politically motivated,” said Belmar.  He feels the camera should not be used in the break room unless a suspect is being questioned in that area.  The chief believes his officers have helped make MetroLink stops safer and said he wants to work with Metro security to improve the situation.

Belmar finds it remarkable that none of the concerns regarding the video from the break room were raised during a recent meeting with Metro.

“The meeting was with the director of security who brought not one of these issues to my attention 14 days ago,” he said. 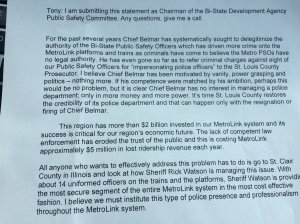 ST. LOUIS - On one of the hottest weeks of the year in St. Louis, snow fell in Brazil.

It’s winter in Brazil right now, but the weather there this week is unusual. Brazil’s average winter temperature range is 65-75 degrees.

ELLISVILLE, Mo. - Summer is in full swing, and with the heat, comes the cicadas.

“They do not come out in as-large of numbers so although they do make a lot of noise. It’s not nearly as noisy as those periodical cicadas," said Dan Zarlenga, regional media specialist for the Missouri Department of Conservation.

A notice sent to parents indicated the district will start the school year with in-person learning, five days a week.

Second man charged in Lake of the Ozarks shooting death

MLB Trade Deadline: What direction will the Cardinals go?