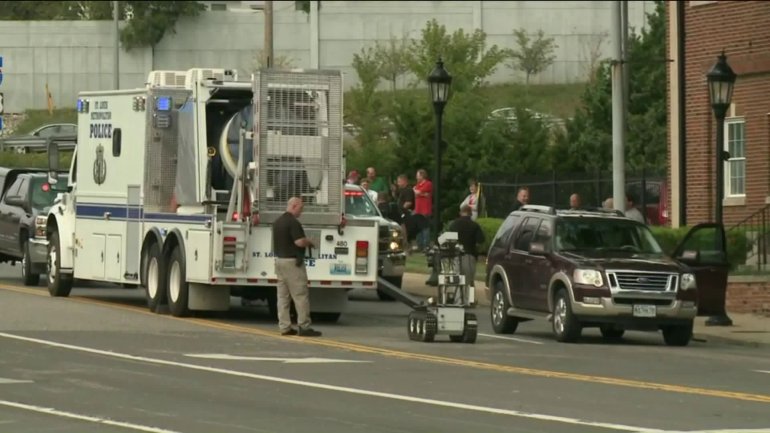 RICHMOND HEIGHTS, MO (KTVI) – The Bomb Squad investigating an area near the intersection of Dale and Big Bend. The intersection is located near Richmond Heights City Hall and Interstate 64.

Several roads were closed near the intersection as investigators deployed the bomb robot. The roadway was reopened by 3:45 p.m.

The City of Richmond Heights says that two men found what they believed to be a pipe bomb at about 2:15pm near a home they were rehabbing. They brought the item to the Richmond Heights Fire Department for identification and disposal.

They placed the item outside the Richmond Heights Public Safety building and then notified the fire department. The St. Louis Regional Bomb and Arson Unit was then called to investigate.

Authorities evacuated nearby buildings and closed several roads. Bomb and Arson officers, using a remote robot and removed the item.  The situation was clear by about 3:50pm.

Investigators searched the home where the item was found. No additional threats were found.

Police are asking anyone who finds a potential explosive device to leave it alone. Do not disturb the item and notify police immediately.

COLUMBIA, Mo. — A Missouri senator is trying to pass a bill that would allow the use of deadly force against protesters on private property. Members of a state Senate committee on Monday debated the change.

St. Louis County Police officers from the Central County Precinct found the man inside of an apartment with a gunshot wound. He was pronounced dead at the scene.

The fire happened at about 8:30 p.m. Wednesday, January 20. Greg Dierberg, the President and CEO of Dierbergs, said the two managers on duty followed protocol and got all of the customers out of the store safely. Since then they had to remove all of the store's contents.