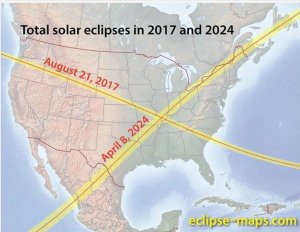 CARBONDALE, IL – On Monday, August 21, 2017, the United States will experience a Total Solar Eclipse, the first one to cross the entire country in 99 years.  The “Great American Eclipse” as it is being called, will reach its point of greatest duration just south of Carbondale, IL. The region won’t have to wait long for another chance to be at the center of another total solar eclipse.  There is a second eclipse on April 8, 2024, that will cross from Mexico to Maine.  And you guessed it; the path of that eclipse will be right over Carbondale.

In fact, the two eclipse paths form an intersection just south of the SIU-Carbondale campus around Cedar Lake, making it a unique location for being able to obsere and study both eclipses from the same location.

A Total Solar Eclipse is when the moon passes between the sun and the earth, blocking the sun from view as casting a shadow on the Earth.  If you’re in the dark part of that shadow, you’ll see a total eclipse. This will be the first total solar eclipse in the continental U.S. in 38 years. For most of greater St. Louis area, the last total solar eclipse was in 1442.

The path will cut across Missouri from St. Joseph to Perryville, passing over towns like Hermann, Pacific, Union, Farmington, DeSoto, Festus, and Ste. Genevieve. In Illinois, the total eclipse will cross from Chester to Carbondale, which will experience the longest duration of Totality, more than 2 minutes and 40 seconds.

In 2017 and 2024, two total eclipses will cross paths in the U.S. Here's the exact centerline crossing in southern Illinois. pic.twitter.com/EYtsXNvKJ2

NASA Maps of Path of Eclipse by state: https://eclipse2017.nasa.gov/eclipse-maps

NOTE: NEVER look directly at the sun, even during a partial eclipse. You can easily damage the retinas of your eyes. Only during the total eclipse phase it is safe to view the eclipse without eye protection.  Sunglasses DO NOT provide enough protection. You MUST use special eclipse glasses. Also don’t look at the sun with cameras or telescopes without special eclipse filters.

ST. LOUIS - Three people overdosed Friday at about 8:00 a.m. at the Justice Center.

St. Louis Fire Department Captain Leon Whitener said one person is in very serious condition, the other needs medical condition and "the third is doing okay."

The Personal Assistant’s primary responsibilities will include:

Man charged after woman’s stabbed to death in camper

Cloudy to start, will warm to near 50 Friday afternoon