ST. LOUIS, Mo. — The Colorado Rockies beat the Milwaukee Brewers 3-2 in the 10th inning Saturday night.  This puts one game between the St. Louis Cardinals and the National League Central Division title.

The St. Louis Cardinals’ push for a division title will go down to the final day of the regular season following an 8-6 loss to the Chicago Cubs on Saturday night.

Adam Wainwright (14-10) allowed four homers for the first time in his career, but the Cardinals maintained a one-game lead over Milwaukee for the NL Central lead when the Brewers lost 3-2 in 10 innings at Colorado. If the teams are tied after Sunday’s regular season finales, they will play a tiebreaking Game 163 in St. Louis on Monday.

Yadier Molina shouted at Cubs left-hander Cole Hamels after being grazed by a fastball in the second inning, sparking a benches-clearing fracas. No punches were thrown, but Chicago landed some haymakers anyway _ two homers from Ian Happ and one each from Kyle Schwarber and Victor Caratini assured the Cubs their first series win at Busch Stadium this season.

Hamels allowed two hits and struck out eight in four innings after Cubs manager Joe Maddon said pregame that he would be limited to three innings. Hamels was making his first start since Sept. 16 after dealing with left shoulder tightness. Chicago has been eliminated from postseason contention.

Steve Cishek (4-6) and four other rlievers turned a lead over to Brandon Kintzler, who pitched a scoreless ninth for his first save.

snapping a string of six straight starts without a loss. He allowed four home runs in a game for the first time in his career. 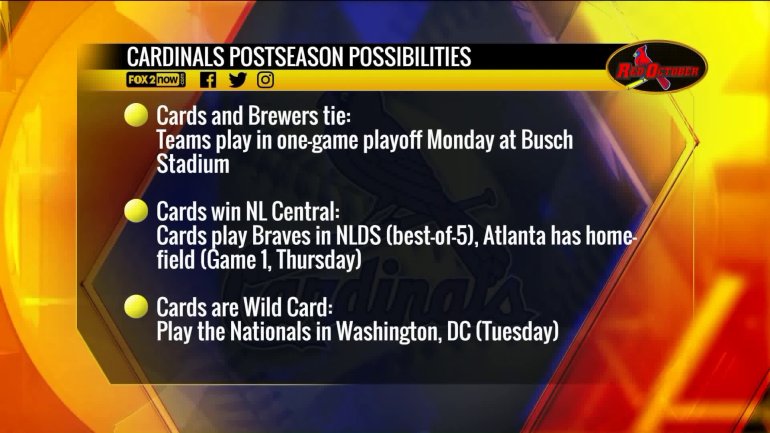 ST. LOUIS - Police are investigating an overnight shooting in north St. Louis that leaves one person dead and three others wounded.

The shooting happened along Bircher Boulevard at Semple Avenue near Interstate 70. Police say the victims were in the car when someone opened fire.

The accident happened around 12:30 a.m along Page Avenue just off I-170 in Overland. Police say, at least one person had to be cut from the wreckage.

WASHINGTON (NEXSTAR/AP) — Negotiators on a huge coronavirus relief bill reported slight progress after talks resumed in the Capitol, with issues like food for the poor and aid to schools struggling to reopen safely assuming a higher profile in the talks.

Multiple obstacles remain, including an impasse on extending a $600-per-week pandemic jobless benefit, funding for the U.S. Postal Service and aid to renters facing eviction. Democratic negotiators spoke of progress Monday at almost the very moment that top Senate Republican Mitch McConnell was slamming them for taking a hard line in the talks.

Ideas for a Prospective Stimulus Check

Investing During a Pandemic Economy

Day-to-day COVID cases dropping in Missouri less than a week after single-day record of 2,000 cases

Ideas for a Prospective Stimulus Check

Investing During a Pandemic Economy