ST. LOUIS (KTVI) – A heartbreaking scene occurred Wednesday afternoon in St. Louis city. Police are looking for the driver of the vehicle that struck and killed a five-year-old boy. The mother and grandmother of little Elijah Taylor were so overcome by their grief, they were taken by ambulance to the hospital.  Louis Macklin was on New Ashland Place where the accident took place. He said the driver "ran the baby over and kept going.” 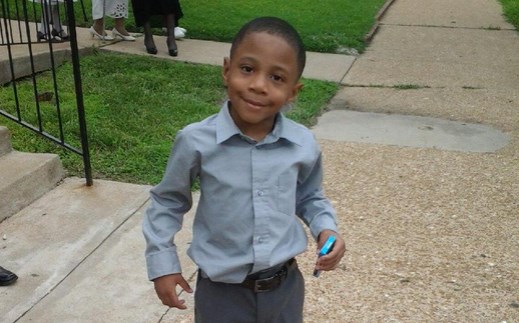 Elijah Taylor was with his mother’s boyfriend who was visiting family. People thought Elijah was in the home using the restroom but he had gone back outside and walked into the street, a pickup truck was speeding towards him. No one realized tragedy was seconds away.

Khalil Hollands saw the driver "flying down the street. As he continued working on a car, he heard a loud noise. When he turned around he saw something fly from up under the driver's back bumper and "he rolled over him.”

Police believe the driver lives in the area. Witnesses told officers they’ve seen the truck ride down the street many times before. Lt. Paul Lauer is leading up the police investigation. "It’s clear that the driver would have known that something happened and he needed to stop," said Lt. Lauer.

Khalil Hollands tried jump in his truck to catch the driver but he wasn't able to.

There were tears in the eyes of officers at the scene. “There were several officers visibly upset," said Lt. Lauer. "We all have families a lot of us have young children, anytime you see something like that happen to somebody that young it’s bad for the officers who first show up on the scene.”

Hollands believes the suspect should turn himself in immediately.

The truck that hit the little boy is described as a bright red Ford F-150 pickup the description of the driver is limited, a black man about 40-years-old, wearing a black skull cap.

In the meantime, Second New Mount Zion Missionary Baptist Church is raising money to help the family cover funeral expenses. Donations can sent or left with the church, located at 4216 W. Lexington.

On September 9, Audubon Coastal Wildlife Network (CWN) and Texas Marine Mammal Stranding Network (TMMSN), with assistance from National Oceanic Atmospheric Administration’s (NOAA) Office of Law Enforcement, responded to a stranded dolphin in Cameron Parish. Locals reported the female bottlenose dolphin was trapped in a pond 9 miles inland, most likely due to the storm surge created by Hurricane Laura, with no access to open water.

Once CWN, TMMSN, and NOAA responders arrived onsite and assessed the situation, a successful rescue effort ensued. Following a physical exam, the dolphin was deemed releasable and transported back to the Gulf of Mexico.

KANSAS CITY, Mo. - Missouri now has its first witness protection program after Gov. Mike Parson signed the bill into law Monday in Kansas City. However, there's no money budgeted for the fund.

The bill, House Bill 66, was one of the six provisions the governor asked for during his eight-week special session on crime. The goal of this legislation is to protect witnesses and get them to speak up about violent crime.

BELLEFONTAINE NEIGHBORS, Mo. – A man wanted for a parole violation and a violent crime charge is at a local hospital with life-threatening injuries after being shot by police late Monday afternoon in Bellefontaine Neighbors.

The incident occurred in the 10400 block of Bellefontaine Road. Police responded to a call of an "officer in need of aid."

St. Louis police have made dozens of arrests in response to downtown ‘cruising’

You can start voting by absentee ballot in Missouri tomorrow; other voting deadlines

Police add personnel in St. Charles after disturbances at bars

Police add personnel in St. Charles after disturbances at bars

St. Louis police have made dozens of arrests in response to downtown ‘cruising’