HARDIN, IL – The U.S. Coast Guard is investigating why 3 tugboats attached to a mooring barge along the Illinois River in Hardin went underwater this weekend.  River levels have been high, but a Coast Guard spokesperson said it’s too soon to determine why they went under water.  The boats and barge were unoccupied.

The tugboats held nearly 5,000 gallons of diesel fuel, according to the Coast Guard.  The agency remained on the scene Sunday as the effort to keep fuel from spilling downstream was underway.  Devices known as booms were put in place to contain as much fuel as possible.  One type of boom blocked the fuel and guided it into an area where another type of boom was used to absorb and remove the pollution. 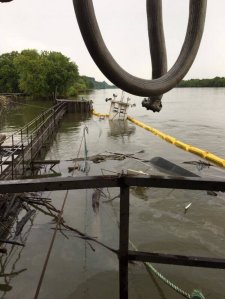 “So right now the spill is contained to an isolated area,” said Coast Guard spokesman Ian Ross.  “There is no risk to the public at this time.”

Ross said an excavation crew is expected to arrive Thursday to try and safely remove the tugboats.  Dive teams have been able to shut off vents where they believe any fuel could leak.  The booms will remain in place until the tugboats are safely removed.

“This was a very unfortunate incident,” said Ross.  “We’re extremely happy no one was injured.  Our role out here as the Coast Guard is to ensure the safety of our responders, ensure the safety of the public and were making sure that no future damage to the environment occurs.���

He said the investigation into the incident could help provide mariners helpful information in order to prevent a similar incident from happening again.

How to follow St. Louis CITY SC broadcasts this year

St. Louis man wanted for sex crimes with a minor

McDonald’s may do away with a familiar item