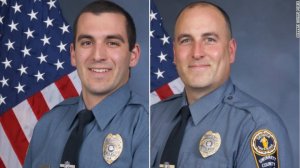 Two police officers were fired in Georgia on Thursday, less than 24 hours after cellphone videos surfaced of them punching and kicking a motorist in handcuffs.

No charges have been filed, but the Gwinnett County Police Department said it’s moving forward with a criminal investigation.

The incident began when a 19-year veteran of the force, Sgt. Michael Bongiovanni, pulled over motorist Demetrius Hollins in a routine traffic stop, according to Police Chief Butch Ayers.

In his report, Bongiovanni said the vehicle did not have a license plate, and continued moving as he tried to pull it over.

The officer said the vehicle appeared to stall, and he got out to speak to the driver and could smell marijuana. He wrote that Hollins was acting strange, and started yelling, “I need my mom.”

Bongiovanni wrote that he ordered Hollins out of the car, but a struggle ensued.

“Hollins refused to place his hands behind his back, spun around and began to actively resist arrest by bending at the waist and trying to push me away,” he wrote in the incident report.

The officer said Hollins had to be Tased and put in handcuffs on the ground.

Bongiovanni also wrote that he remembers detaining the same man in a previous traffic stop, and the man was allegedly found with a loaded gun.

“In my previous encounter he reached for a loaded firearm that was under his seat,” he wrote in his report.

In a cellphone video shot by a witness that emerged Wednesday night, Officer Robert McDonald, who was responding to assist Bongiovanni, emerges from offscreen and kicks Hollins while he is on the ground.

The department says an investigation into McDonald’s actions was launched immediately, and he was fired by mid-afternoon Thursday.

But the trouble for the department did not end there.

During the investigation, a second video surfaced, shot from another angle by another witness. In this video, Bongiovanni can be seen approaching Hollins, who is still inside the car. As Hollins exits the vehicle with his hands up, the officer punches him in the face.

Both Bongiovanni and McDonald were questioned by the department’s internal affairs unit about their actions, Ayers said.

McDonald was forthcoming, saying he was wrong for kicking Hollins. But Bongiovanni only said in written documents and in-person interviews that a struggle occurred between him and Hollins, according to the police chief.

Bongiovanni was let go by the department for his actions and for lying to investigators.

Both officers did not respond immediately to CNN requests for comment.

‘That punch was unreasonable’

Ayers said he was disturbed by what he saw in the videos and by the actions of his officers.

“(Bongiovanni) had the opportunity to tell us what happened in the report and when he was interviewed by internal affairs. He said nothing about a punch. In this case, what we saw on video, that punch was unreasonable and unnecessary.”

Ayers said when Bongiovanni was asked about the discrepancies in his account and the newly surfaced video, he replied, “It’s different on the streets.”

Ayers said, he was stunned.

“I am almost for a loss of words for what we had to go through today for the unwarranted actions of two of my officers,” he said.

Fired officers had a history

McDonald joined the force in 2013, and received all high marks from Bongiovanni, his supervisor, during his last performance evaluation.

The evaluation said McDonald “always deals with members of the community in a courteous, professional, calm and controlled manner.”

The police department said it has launched a criminal investigation that will ultimately be sent to the District Attorney’s Office.

“What happened yesterday was clearly outside of state law and department policy,” it said in a statement.