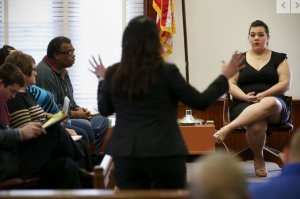 FAYETTE, Mo. (AP) _ A Missouri prosecutor has filed a second-degree involuntary manslaughter charge against a Dairy Queen manager accused of bullying a 17-year-old employee who killed himself.

A special prosecutor filed the charge Wednesday against 21-year-old Harley Branham, who testified she never bullied the boy before his December death in Howard County. Other witnesses said the boy was bullied for years at school and at work.

The charge was recommended by a jury assembled in a rare investigation requested by the local coroner. The process is similar to a grand jury investigation but public.

Jurors heard hours of testimony from 20 witnesses before recommending the charge Tuesday. Jurors also concluded that negligence from the Fayette store and the Glasgow School District contributed to the death.

The local coroner says he sought the inquest because he thought it important to publicly acknowledge that bullying was a problem.

A rare investigation requested by a Missouri coroner has resulted in prosecutors being asked to file manslaughter charges against a Dairy Queen manager accused of bullying of a 17-year-old employee who later killed himself.

The Howard County coroner sought an official inquest into the teenager’s December death. The process is similar to a grand jury investigation but public.

The manager testified she never bullied or humiliated the teen, and he never seemed bothered by jokes. Other witnesses testifid the boy had been bullied for years at school and at work before he shot himself outside his family’s home.

Jurors concluded Tuesday that negligence from the Fayette store and the Glasgow School District contributed to the death and recommended the charge.

ST. LOUIS--Hannibal resident Daron Caswell travels by air occasionally to visit family. He was at St. Louis Lambert International Airport Friday to greet family. Caswell believes some air travelers will soon return to the skies after staying away because of COVID concerns.

“People are ready,” he said.

The University of Missouri football program started spring practice Friday afternoon in Columbia. You often hear a lot about sports teams trying to get everyone on the same page. On Friday, everyone in the Tiger program at least put on the same jersey.

They wore the number 40, in honor Norris Stevenson, who became the first African-American football player on scholarship when he was recruited from Vashon in 1958. Stevenson, who died in 2012, later played in the NFL and the CFL before coaching track and field at St. Louis Community College for thirty years.

ST. LOUIS - February is not a time most people are thinking about the pool, but they should be. Experts in swimming safety are worried that we are going to have a ‘drowning epidemic’ due to the increase of pools from the COVID lockdown.

Reuters reported last summer that the pool industry's trade group expected a 10 percent increase in sales, with talk that orders last summer wouldn't even be installed until 2021.