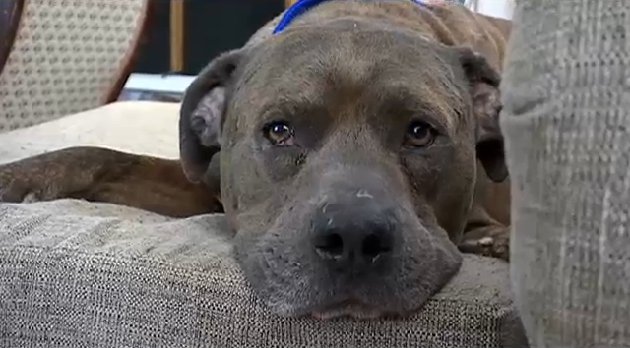 Greer, SC (WHNS) — A pit bull was badly wounded after being hit by up to 90 shotgun pellets. Abby’s Angels, a Greenville animal rescue currently is caring for him. Jennifer Remeta runs the rescue and she said she thinks someone intentionally harmed the dog.

“When I first met him, I was a little leery of him because he’s all scared up and he’s a big guy,” said Remeta but said he came right up to her and kissed her. The dogs name is Warrior and he was brought into Greenville Animal Care as a stray.

After finding out Warrior was going to be put down if not adopted, Abby’s Angels brought him into their care. “I call him the older gentleman, he just kind of walks around and follows you around,” said Remeta who now has Warrior staying at her home until he heals from his wounds and several infections.

Remeta took Warrior to the vet who thought the dog had been hit by a car due to the limp he has, but found over 90 pellets from both birdshot and buckshot.

“I wish we knew a little bit more about what he’d been through, what had gotten him to this point, it worries me more that they did it deliberately,” said Remeta. The vet told her that because some of the pellets made their way into Warrior’s leg joint it causes him pain which leads to him limping.

Warrior is on several medications for an ear, eye and upper respiratory infection, but above all scars cover his body where he was shot. “It amazes me after being injured in this manner how a dog could even want to be around people, how they could trust people enough to want to seek out that attention,” said Remeta.

Warrior may need surgery on his right leg to improve his limp and will need more medications. Remeta has set up a go fund me account to help pay for his medical bills. (http://www.gofundme.com/helpwarrior)

And, if you’re interested in adopting Warrior, you can email abbysanimalangels@gmail.com and you can also find more information on Warrior on their Facebook page. (https://www.facebook.com/AbbysAnimalAngels)

The Missouri Department of Health and Senior Services reported that the 1,387 new cases bring the total to 111,516 since the pandemic began.

The fourth drive-through event was held at Mid Rivers Mall. Approximately 30,000 masks were distributed. Each resident received 10 free disposable masks that were placed in bags by workers wearing personal protective equipment (PPE). Other people working at the event wore masks and gloves as well.

Officers arriving on the scene found the lone occupant, a male deceased.