Skip to content
Breaking News
Breaking News
IL: 243 deaths/10,357 cases; MO: 24 deaths/2,291 cases. List of St. Louis area coronavirus disruptions
This is an archived article and the information in the article may be outdated. Please look at the time stamp on the story to see when it was last updated.

ST. LOUIS – The man accused of shooting and killing an Illinois state trooper has a criminal history punctuated by drug charges, obstruction of justice, and being a felon in possession of a firearm.

Hopkins and other troopers were attempting to serve a warrant at Grant’s residence in the 1400 block of N. 42nd Street and Caseyville Avenue just before 5:30 a.m. on Friday, August 23. Hopkins was struck during an exchange of gunfire at the home. Three people were taken into custody at the scene.

Trooper Hopkins was rushed to St. Louis University Hospital where doctors attempted to save his life. He was pronounced dead at 6:10 p.m. Hopkins was 33. He was the fourth state trooper to die in the line of duty in 2019.

Fox 2 News has learned Grant has a criminal record in St. Clair County going back more than 25 years. Most of his arrests and charges are for traffic violations.

Grant was charged with obstructing an officer in Washington Park in April 1995. Most of those cases were dismissed.

Our news partners at the St. Louis Post-Dispatch reported that in September 2003, Grant sold cocaine to an undercover officer near a school in Belleville. He pleaded guilty to charges in that case and was sentenced to four years in prison.

Hopkins began serving with Illinois State Police around a decade ago. He was a native of Waterloo, Illinois. He was married and the father of 4-year-old twins and an infant daughter. 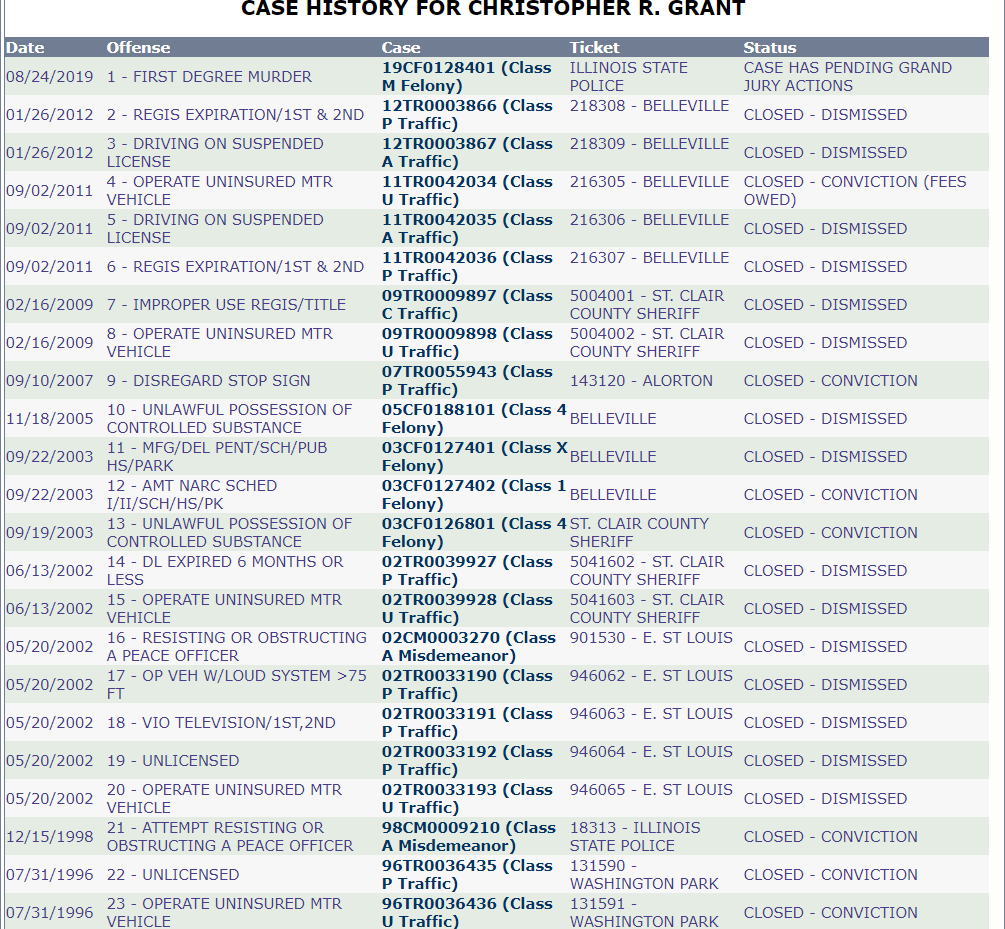 JEFFERSON CITY, Mo. (AP) - Missouri is asking medical professionals who are not working to join a specialized state team that responds to critical health emergencies.

“We are calling on all available medical professionals to support the effort to fight the virus by joining a critical reserve unit now focusing on providing care in high need areas across the state,” Gov. Mike Parson said Saturday. “Their efforts can help save the lives of their fellow Missourians.”

(CNN) -- As the coronavirus pandemic spreads across Europe and the United States, a global scramble for medical equipment such as respirator masks and gloves is underway. Several countries have accused the United States of trying to hijack their orders, but the details of who may have done what to whom are still murky.

President Donald Trump said Saturday that there could be a shortage of ventilators available to Americans as the coronavirus pandemic spreads across the nation.

When pressed by CNN's Jeremy Diamond at the White House coronavirus task force briefing as to whether there will be a shortage of ventilators in some cases, Trump said there "could be" as the country enters a critical phase in the fight against the pandemic.

US coronavirus death toll tops 8,000 as Trump warns ‘there will be a lot of death’

Virtual tip jars are helping local servers during the pandemic

Walmart to limit number of customers in stores starting April 4

Virtual tip jars are helping local servers during the pandemic

US coronavirus death toll tops 8,000 as Trump warns ‘there will be a lot of death’