JEFFERSON CITY, Mo. – Missouri conservation officials say a particularly troublesome invasive fish has been found in the state for the first time.

An angler caught a northern snakehead in a ditch within the St. Francis River levee in April in Dunklin County. 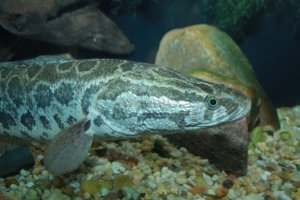 The St. Louis Post-Dispatch reports the fish tolerates a wide range of water temperatures, reproduces five times per year and preys on animals that native species eat. It also can survive several days out of water.

It was the first time the fish was found in Missouri and conservation officials say they have no evidence that a population has been established in the state.

The conservation department recommends killing any northern snakehead caught in the Missouri River.