Skip to content
Breaking News
Breaking News
IL: 5,083 deaths/ 114,306 cases; MO: 696 deaths/ 12,492 cases. List of St. Louis area coronavirus disruptions
This is an archived article and the information in the article may be outdated. Please look at the time stamp on the story to see when it was last updated. 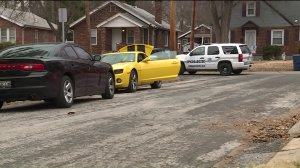 The police pursuit started when a Normandy police officer spotted a yellow Camaro at a gas station that was wanted for leaving the scene of an accident along I-70 at Lucas and Hunt.

When the officer reached into the car to arrest the driver, the 23-year-old man sped off, almost dragging the officer.

After a short chase the suspect stopped at his home in Ferguson, where he was arrested.

The officer was not injured.

CAPE GIRARDEAU, Mo. - Police in southeastern Missouri are investigating at least three separate shootings in Cape Girardeau that happened within an 8-hour period. Television station KFVS reports that the first shooting happened around 10 p.m. Wednesday, when officers found a man who had been shot in the back in a parking lot.

Police were called out again at 2:30 a.m. Thursday to a neighborhood where a man was several times outside of a home. And shortly before 6 a.m. Thursday, police say a woman was shot in the stomach inside her home during a disturbance with someone she knew. Police say none of the shootings were related. Authorities did not give the medical conditions of those shots.

Weekdays at 11:30 a.m. EST, Newsfeed Now will be streaming the latest updates on the coronavirus outbreak utilizing our newsrooms across the country. If you miss the live report, you’ll be able to see a replay minutes after the stream ends.

(KARK/NEXSTAR) - Roughly 2.1 million people applied for U.S. unemployment benefits last week, a sign that companies are still slashing jobs in the face of a deep recession even as more businesses reopen and rehire some laid-off employees.

ST. LOUIS, Mo. - The city amended the title for its health director. Dr. Fredrick Echols is now the acting director of the Department of Public Health. This comes after the city counselor's interpretation of the city charter which says the director must be licensed.

A recent court filing shows that Dr. Echols is not currently licensed to practice medicine. A spokesperson for St. Louis says Dr. Echols meets the qualifications for the health director.