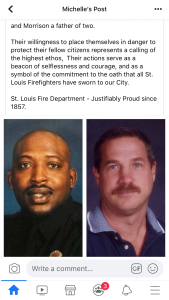 Martin and fellow firefighter Rob Morrison died while fighting a fire in south St. Louis in 2002.

Martin died while trying to rescue another firefighter. Volunteers and Martins’ family are making the holidays a bit brighter for others.

Captain Wyman Brown with the St Louis City Fire Department was there the night tragedy unfolded, a night he will never forget, “He was going back to rescue a fellow member and that’s what we do. We do our job, he put his life on the line to try and bring someone else home,” said Brown.

To continue Captain Derek Martin’s memory, a food drive was held Saturday morning in honor of Martin, which provides thousands of baskets of food to needy families throughout the St. Louis area.

The event was sponsored by the Fire-Fighters Institute for Racial Equality. Captain Martin help start the program before he died. The food drive was re-named in his honor.

Martin’s daughter Kyla was just 3-years-old her when her father was killed. Now she’s a junior at Syracuse University.

Her two older brothers also young at the time both work in the NFL. She’s grateful for the community support over the years.

BENTON, Ill. (AP) - A Missouri man who practiced dentistry in southern Illinois has been sentenced to a year and a day in prison for fraud despite a probation recommendation by federal prosecutors and the dentist’s lawyer.

U.S. District Judge Staci M. Yandle said Thursday probation would not be appropriate for Dr. Yun Sup Kim. She said it would reinforce some people’s impression “there are two separate justice systems, one for the privileged and one for the underprivileged.”

Presumptive Democratic nominee Joe Biden called for governors to implement mask mandates for the next three months on Thursday, saying that doing so would save 40,000 Americans' lives.

"Every single American should be wearing a mask when they're outside for the next three months as a minimum," the former vice president told reporters after he and his running mate, California Sen. Kamala Harris, received a briefing on the pandemic from public health experts.