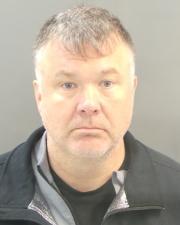 ST. LOUIS – A former St. Louis police officer is accused of sexually assaulting a pregnant mother while he was on duty.

John Stewart has been charged with sodomy.

Court documents state Stewart went to the victim’s home in June of 2015 for a report of a stolen car.  While there the victim says Stewart forced her into a sex act and that she complied out of fear.

Our partners at the St. Louis Post-Dispatch report Stewart resigned less than a week after the allegation.

ST. LOUIS – A 44-foot long boat that first became trapped on the Chain of Rocks on Oct. 5 is still stuck in the middle of the Mississippi River nearly two weeks later.

COLLINSVILLE, Ill. - Illinois State Police are looking for the vandals who spray-painted outside District 11 Headquarters.

The headquarters building is located on Eastport Plaza Drive in Collinsville.

ST. LOUIS - A man was shot and killed near Fairground Park Monday at about 9:30 p.m.

Supporters push for $1.26M in federal funds to get Loop Trolley in service again

Someone from St. Louis won $50,000 from a lotto scratchers game

You’ll own a fleet of St. Louis Metro buses if you win this auction