Since then, LaFleur has led the Packers to a 13-3 record and the No. 2 seed in the NFC this season with a playoff game just days away against the Seattle Seahawks.

While it may be hard to find someone in the state who doesn’t know who LaFleur is now, he didn’t start that way.

WFRV spoke to many Packer fans after LaFleur was hired and the responses were similar – “Who is he?”

Mike Budzisz of Oshkosh said his first thoughts of hearing the news were, “Who? Who is he? I had no idea who he was… I got read up on the internet… They say he’s like Mike McCarthy when he came in here – young, offensive-minded. Offense is needed to win games.”

“He’s not really well-known, I guess I would say,” said James Loy, a Packers fan visiting from Arizona. “I’m… surprised they (didn’t make) a bigger move, but I guess we’ll see how it goes.” 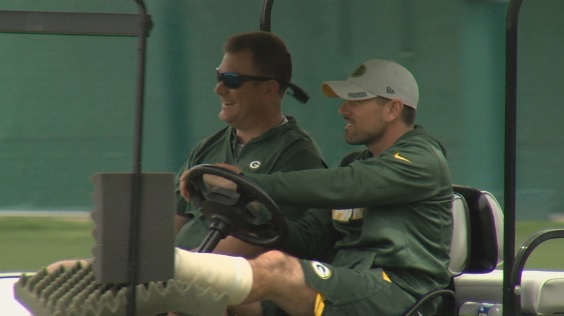 In February, LaFleur introduced his new coaching staff, which included 10 returning coaches from the 2018 season.

LaFleur quickly won adoration – and some laughs – from fans after he became the first major injury to the Packers. He reportedly tore his Achilles tendon playing basketball at Lambeau Field during offseason training in May.

In the preseason, LaFleur would lead the Packers to a 2-2 finish, with losses coming from the Baltimore Ravens and the Oakland Raiders.

The Packers would go on to start the regular season by defeating the Chicago Bears during the 199th meeting of the rivals, outscoring them 10-3. Not only was this a victory for the Packers, but it was also a milestone for LaFleur his first win as a head coach.

LaFleur would go on to earn 12 more wins as head coach, taking the Packers to a 13-3 finish during the regular season.

LaFleur also became the most recent rookie head coach to record 13 wins in a season since Jim Harbaugh did it with the San Francisco 49ers in 2011.

The Packers got their first win at U.S. Bank Stadium against the Minnesota Vikings in December, making LaFleur the first head coach of the Packers to achieve the feat.

Off the field, LaFleur also became the fourth head coach of the Packers to be featured in Cellcom commercials.

Now, LaFleur is preparing to make his first playoff run as a head coach on Sunday against the Seahawks.

ALEXANDRIA, Va. (KNWA) — An Arkansas man was arrested on Monday for allegedly attempting to blow up a vehicle at the Pentagon, according to a release from the U.S. Attorney’s Office in the Eastern District of Virginia.

Matthew Dmitri Richardson, 19, was discovered in the Pentagon North Parking lot on Monday by a Pentagon police officer on patrol, according to the release.

Turnaround Tuesday didn't happen for stocks. US markets are back in the red, adding to their sharp losses Monday amid coronavirus fears.

The latest tally of novel coronavirus cases in the United States has jumped to 57, according to the Centers for Disease Control and Prevention, as one of the agency's top officials warned Tuesday that health experts expect to see the virus spread.

‘Always remember to love each other’ St. Louis Alderman Samuel Moore passes away

Trump claims coronavirus is ‘going to go away’ despite mounting concerns

‘Always remember to love each other’ St. Louis Alderman Samuel Moore passes away

Trump claims coronavirus is ‘going to go away’ despite mounting concerns