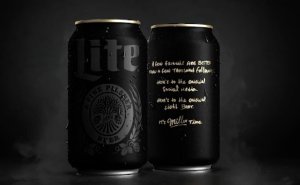 ST. LOUIS, Mo. — A new ad campaign is encouraging Americans to return to the original social media, having a beer out with friends. Miller Lite is promoting dark-colored offline cans to bars across the country to inspire more drinkers to take a break from social media. Instead, they are encouraged to spend time with friends over a cold brew.

The writing on the back of the new offline can says, “It’s better to have a few friends in real life than a few thousand followers.” The Miller Lite off-line cans will be supported with a campaign that aims to inspire drinkers to invite friends to go bar hopping.

Miller Lite’s new TV spot focuses on missed connections, people staring at their phones instead of interacting with friends. One of the spots has the message that it is better to stop swiping left because you might not notice what’s right in front of you. In the commercial, a woman misses the attractive man to her right because she’s so busy looking at her smartphone.

The 12-ounce cans are a limited edition and will be available in more than 500 bars and taverns in 27 states starting this week.

Missouri is a participating state. Here’s how you can get this beer:

ST. LOUIS – Detectives with the St. Louis Metropolitan Police Department are working to solve a bank robbery that occurred Friday afternoon in the Lindenwood Park neighborhood.

According to a police spokesperson, the robbery happened at the First Community Credit Union on Watson Road around 4 p.m.

PHILADELPHIA – Police in Philadelphia arrested a man who led them on a chase while driving a stolen ambulance!

The chase began just after 9 p.m. after a reported shooting.

FERGUSON, Mo. – There’s been an overwhelming response to a story Fox 2 shared with Thursday evening, about a Ferguson mother struggling to recover following a house fire.

Tamieka Williams told us after she got out of the ICU following treatment for severe burns, she learned her landlord had tossed out her and her children’s belongings.

This tiny electric car looks like a washing machine and costs just $6,600