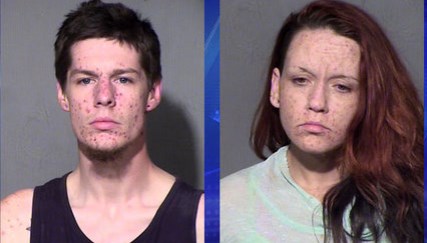 SURPRISE, AZ (KTVK) — A 4-year-old girl was found inside a vehicle littered with drugs and drug paraphernalia Sunday afternoon, police said. The girl was within arm’s reach of pocket knives, a BB gun and numerous syringes commonly associated with drug use, officers said. Police were drawn to a Home Depot parking lot at 13760 W. Bell Road on a report of suspicious persons due to off behavior.

The driver, Brian Tucker, 26, and a back-seat passenger, Jacqueline Rackham, 30, along with the child, were found sitting in the vehicle. After asking everyone to step outside, the officer said a clear meth pipe, a spoon with heroin residue, a marijuana pipe, and another one hitter pipe were visible inside the vehicle.

The officer said a clear baggie, which contained a white substance that later tested positive for cocaine, was found underneath the radio. A tied-off shoe lace commonly used for injecting drugs was located where Tucker had been sitting. Tucker told police none of the drugs or paraphernalia belonged to him but to his friend who was in the vehicle earlier.

The officer said while performing a search of the vehicle, numerous syringes were seen on the ground, many of which were uncapped and within arm’s reach of the child.

The vehicle was also littered with trash and old and stale food.

JEFFERSON COUNTY, Mo.- The Jefferson County Health Department has moved the county back into the highest alert status of red. The department says that means there is widespread uncontrolled community transmission in the county.

According to the county's COVID-19 guidance indicator, a red status means a stay-at-home order is necessary. No word from county officials if any change is coming.

KIRKWOOD, Mo. - Fall is now officially here. While you can find mums, gourds, and pumpkin-flavored everything, you’ll have to wait a bit for our leaves to change. Over the coming weeks, trees will all be changing colors and the Missouri Department of Conservation will be tracking it for you.

Shorter days and cooler temperatures are a recipe for leaves to change colors, says Danny Moncheski, a community forester with the Missouri Department of Conservation.

GILLESPIE, Ill. - The Macoupin County Sheriff's Office needs the public's help with a crime involving damage to headstones at Wheeler Cemetary. Five limestone headstones in the rural Gillespie cemetery were found broken in half and some into pieces.

According to Macoupin County Sherrif Shawn Kahl, a cemetery caretaker discovered the damaged headstones. The caretaker said the crime occurred between Sept. 12 and Sept. 13 in the evening hours.

St. Louis only has enough CARES Act grants for 800 businesses – A meeting may change that