ST. LOUIS, MO — Govenor Eric Greitens has sent a scathing letter to Missouri Senators Claire McCaskill and Roy Blunt on official letterhead.  He is asking the senators to stop grandstanding over allegations of improper care at St. Louis Veterans Home. Greiten’s letter could also be considered to be doing the same thing.

Greitens is responding to this letter sent Tuesday by Missouri’s senators.  This is an excerpt:

“We know you recognize leadership in the face of these troubling claims can make a powerful difference. The mission of caring for the brave men and women who have courageously fought for and defended our country is deeply personal to both of us. We remain firmly committed to working with you and will continue to monitor all developments related to these concerns. On behalf of Missouri veterans, we appreciate your prompt response to this matter.”

Greitens’ letter says in part, “We don’t need more meaningless letters from career politicians. What we need is action. After all that time in Washington, both of you should have some pull there, so you can talk to your friends at the VA. Get to work helping veterans, and fix the broken bureaucracy that fails our veterans and their families.”

Senator McCaskill’s office has responded to Greitens’ letter: “This is a state-run veterans facility. The governor should toughen up, accept the criticism, and fix it.”

Senators Roy Blunt and Clair McCaskill are supporting Lt. Governor Parson’s investigation into allegations of improper care at St. Louis Veterans Home. Parson’s office said that they, “Are also troubled by allegations of higher than average use of anti-psychotic medication on an as needed basis.”

The Associated Press reports that Republican Gov. Eric Greitens has directed the department to launch an independent investigation this week. The review comes after complaints from workers, patients and their families of medication issues, low staff morale and neglect of residents.

This is the full text of the letter Governor Greitens sent to Missouri’s senators:

I appreciate your recent interest in the St. Louis Veterans Home. Frankly, it’s good to see some signs of life out of Congress. A lot of us back home are wondering what you’ve been up to.

I’ll tell you what we’ve been doing in Missouri: We’ve been fighting for veterans. When we learned about the possible mistreatment of veterans at the St. Louis Veterans Home, hello called on the Missouri veterans commission to investigate immediately. Then we directed a Department of Public Safety to complete a follow-up investigation. Then, we asked the Department of Veterans affairs to do the same. We will continue to demand the best for veterans, and we will hold those responsible for their care accountable. As a veteran myself, I won’t tolerate a single one being mistreated. Every veteran, and every veteran’s family, should have confidence in their care. I won’t rest until they do.

But you probably knew about these investigations before you sent the letter, “requesting an investigation.” Or, maybe you didn’t? Because in the other part of your letter, you asked for a copy of the VA report on the St. Louis Veterans Home. The VA publicly released their report back in September. If you lost your copy you can Google, “St. Louis veterans Home Survey Report VA.” It’s the second link down.

We don’t need more meaningless letters from career politicians. What we need is action. After all that time in Washington, both of you should have some pull there, so you can talk to your friends at the VA. Get to work helping veterans, and fix the broken bureaucracy that fails our veterans and their families.

I saw too many of my friends and fellow service members return home from combat and get mistreated by the VA. I saw lives ruined and families destroyed. In fact, the terrible treatment of our veterans is one of the reasons I ran for governor. I’ve seen this pain with my own eyes. I didn’t just read about it in a report.

While have you, one more thing: Missourians need Congress to get its act together to do it’s job, tax relief, Obamacare repeal, securing our borders – folks back home are looking for some results from Washington DC. It’s been too long, and we are tired of waiting. 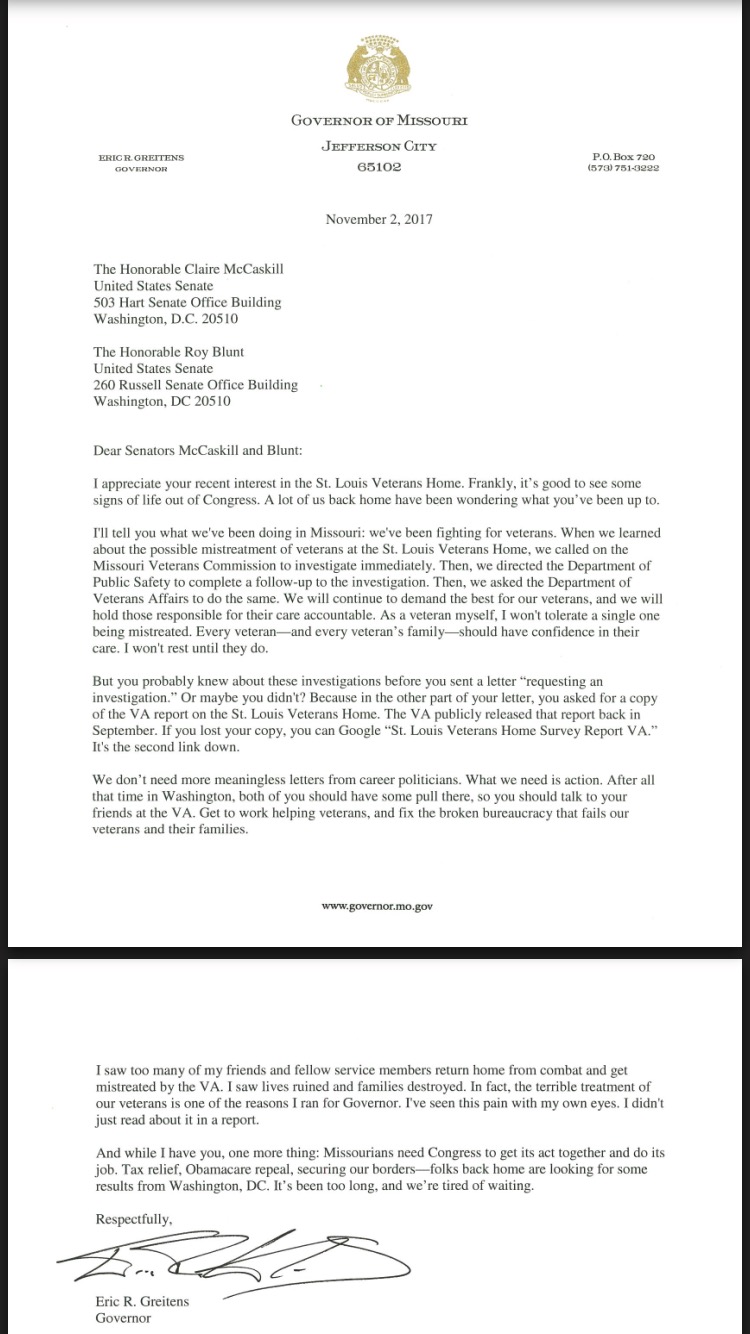