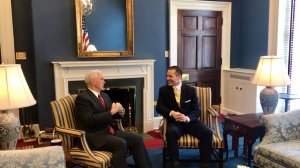 Greitens announced on his Facebook page that he and the vice president met on Saturday.

He said he and Pence discussed how the Trump administration can help take Missouri “in a new direction with more jobs and higher pay.” Greitens also mentioned safer streets and better schools for the state.

The governor says the two men also discussed the negative financial impact of Obamacare and said Pence promised relief for the state’s budget is coming.

O'FALLON, Mo. (AP) — With the number of coronavirus patients requiring hospitalization rising at alarming levels, Missouri and perhaps a handful of other states are unable to post accurate data on COVID-19 dashboards because of a flaw in the federal reporting system.

Since Tuesday, the Missouri Department of Health and Senior Service’s coronavirus dashboard has posted a message that the total number of patients hospitalized for COVID-19 has been underreported since Oct. 17. The note blamed “challenges entering data” to the portal used by the U.S. Department of Health and Human Services for collecting daily hospitalizations around the country.

Colonel Eric T. Olson, superintendent of the Missouri State Highway Patrol, announced the results of the 2020 Public Opinion Survey. Through a web based survey, a total of 2,476 people responded to from August 1 to 31, 2020. This included 1,944 Missouri residents, 64 nonresidents, and 468 respondents who did not disclose this information.

Jefferson City, MO—Missouri State Treasurer Scott Fitzpatrick and the Department of Labor and Industrial Relations’ (DOLIR’s) Division of Employment Security have partnered to help return Unclaimed Property to Missourians who have applied for unemployment benefits.

"Unclaimed property exists because at some point contact information related to an owner of an account somewhere has gone bad and cannot be located," explained State Treasurer Scott Fitzpatrick. "In the treasurers office unclaimed property is something we are constantly working at trying to return."

Nelly says he loves The Masked Singer; why he isn’t doing it

Amazon wants to pay you for your receipts

How many parents are stealing their kids’ Halloween candy?

15-year-old shot to death inside car

New iPhone 12 now for sale; trade-in offers and how you can get it for free