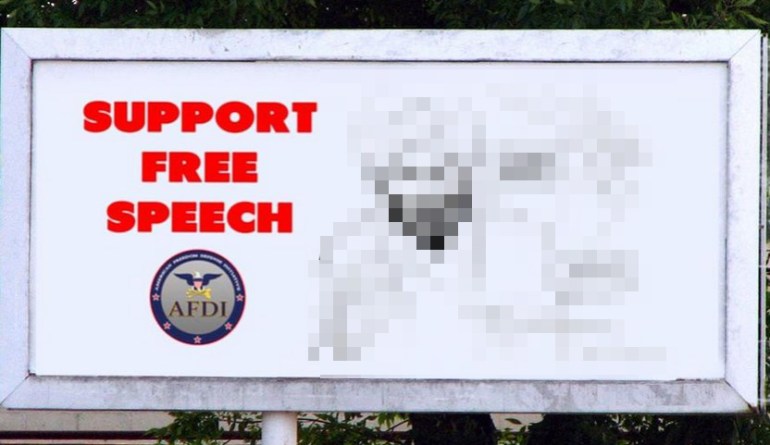 ST. LOUIS, MO (KTVI) – Several billboards with cartoons of the Prophet Muhammad have been placed around St. Louis by the American Freedom Defense Initiative. It is part of a nationwide campaign to support free speech. They claim to have 100 billboards in the area.  Some have been spotted in south St. Louis and by Lambert-St. Louis International Airport.

Depictions of the prophet are considered extremely offensive by Muslims.  Critics call AFDI an intolerant hate group opposed to freedom of religion.

A Prophet Muhammad cartoon contest was held by AFDI in Texas last month.  Gunmen showed up to put an end to the event.  They were shot and killed by police.

The billboards are being condemned by the St. Louis Cabinet of Interfaith Partnership. It represents 29 faith groups in the area.

We, the members of the Cabinet of Interfaith Partnership, reaffirm our commitment to work toward equality for all our citizens. As we seek to tear down the racial disparities and prejudices that divide us, we remember a fundamental principle of all of our faith traditions—that we are called to treat others as we wish to be treated.

As we seek meaningful change and healing, let us honor the basic tenets of others. Let us pray for understanding of the pain of others. Let us hear one another. Let us commit to creating real solutions that bring an end to unequal treatment and unequal opportunity. Let us all help build a more just and peaceful community.

Interfaith Partnership includes 29 different faith groups in the St. Louis area. Our motto: “As communities of faith, we agree to differ, promise to love, and unite to serve.”

A statement from AFDI says in part:

“Because the media and the cultural and political elites continue to self-enforce the Sharia without the consent of the American people by refusing to show any depictions of Muhammad or showing what it was in Texas that had jihadists opening fire, we are running a billboard ad featuring the winning cartoon by former Muslim Bosch Fawstin from our Muhammad Art Exhibit and Cartoon Contest in Garland, Texas.”

FOX 2 has not posted the depiction of the Prophet Muhammad in respect to those who practice Islam in our community.  The same policy applies to offensive symbols to Christian, Jewish or any other religions.

KANSAS CITY, Mo. - A person was stabbed to death outside a store on the eastern side of Kansas City, and a witness told investigators the stabbing may have stemmed from a shoplifting incident, police said.

Officers were called Tuesday night to 18th Street and Prospect Avenue for a stabbing and found a wounded person at the scene, police said in a news release. Officers performed CPR and other attempts to save the victim’s life, but the person died at the scene. Police said a store employee indicated the incident involved a shoplifter.

The killing is the 72nd homicide reported in Kansas City this year, according to the Kansas City Star.

JENNINGS, Mo. - One man is dead and another is injured after a fight between two large groups turned into a shooting.

St. Louis County police say the shooting happened shortly after 9 p.m. Tuesday near an apartment complex in Jennings. The victim's name has not been released.

Responding officers found two men with apparent gunshot wounds. They were taken to a hospital, where one of the men died. The other man was treated for injuries described as non-life threatening.

Police say the shooting happened during an altercation between two large groups. No further details were released.

On Wednesday, NASA will launch it's first manned mission from US soil since 2011 and there are many ways for you and the family to be part of the moment.