ST. LOUIS, MO (KTVI) – MoDOT is closing Interstate 44 between Route 100 and I-270 near St. Louis. This should cause major traffic delays through the rest of the week.

The rising Meramec river may close I-44 at I-270 as early as 7 p.m. Monday.   This is earlier than previous forecasts.  MoDOT says the highway will close at some point tonight between Gray Summit in Franklin County and I-270.

Westbound I-44 will close at I-270 while eastbound I-44 will be closed at Route 100/Gray Summit.  Local traffic only will be allowed westbound to Bowles and eastbound to Pacific, Eureka and Route 109.  Interstate traffic cannot get through this area.  Route 100 between Gray Summit and I-270 will be the alternate route for I-44 travelers.

Once I-44 closes, the following routes are also expected to close and affect Tuesday morning’s commute:

Flooding is causing hundreds of roads to close throughout the state. Three days of heavy downpours have ended. Now the water is making its way from streams and overwhelming rivers. The situation is similar to record flooding from December 2015. The National Weather Service says that many area rivers are experiencing record or near record flooding.

Drivers will be taking a detour at Highway 100 (Manchester Road) to avoid the closed portion of I-44 near St. Louis. The road is already congested. MoDOT says that the extra traffic is going to make things much worse. Assistant District Engineer Tom Blair says,”Minutes along that route will become hours.” Try to find a way to avoid this route if possible.  A 57 mile stretch of I-44 is also closed in southern Missouri.

One westbound lane of I-44 at Bowles will remain open near I-270. This is to help people who live and work in Fenton. It is also to help with hospital access. MoDOT also expects Route 109 near Eureka to go underwater overnight.

MoDOT anticipates that southbound Highway 67 will close Monday afternoon. They expect it to be closed the rest of the week. They will be moving southbound drivers onto a northbound lane from the Mississippi to the Missouri river.

141 is closed at I-44. MoDOT expects the road to be closed the rest of the week and possibly into the weekend.

MoDOT is monitoring the water near I-55. The highway closed during the flooding last winter. They say that the water levels are near the highway and a closure, later this week, is possible.

There are many more roads closed across the state. See a map of current closures here.

Grab our app for the the updates on your phone 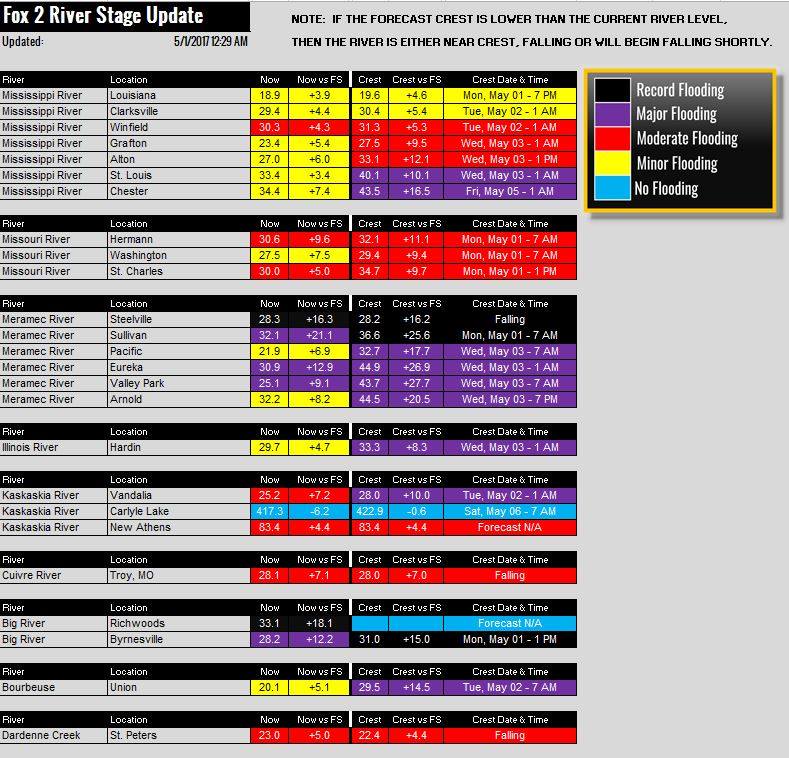 Dress designer stood girls up on prom day in St. …

East St. Louis residents will go another summer without …

Man who lost legs in crash happy to be alive

Teen who died of cancer not honored at graduation