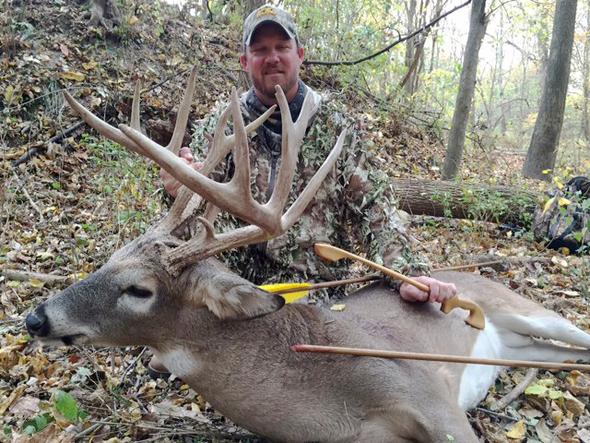 DEFIANCE, MO (KTVI) – A Missouri hunter took down a 15-point buck only four months after taking up one of hunting’s most challenging methods. Paul Gragg, 49, of Defiance used an atlatl, a weapon that predates the bow and arrow.

The method is legal throughout all portions of Missouri’s deer season, from Sept. 15 through Jan. 25. The Missouri Department of Conservation says the the atlatl is used to throw a 4-6 foot long dart. They go on to describe the weapon in great detail in an article on their website:

The atlatl is a wooden shaft approximately a foot-and-a-half long with a socket or knock at the rear to engage the dart.

The dart is placed along the shaft with its back end resting in the socket or knock. The hunter grips the atlatl near its front end and performs a forward throw using the upper arm and wrist. The flipping motion of the atlatl creates angular momentum that propels the dart with greater speed and power than can be achieved with the arm alone. Darts thrown from the weapon can achieve velocities of nearly 100 miles per hour.

This method of hunting can be difficult to learn but very effective. Gragg tells the Missouri Department of Conservation that:

“When I first started doing it, I thought there was no way this was going to work,” admitted Gragg. “But after I practiced it for a little bit I was getting fairly good at it. Once you get the feel for it you can throw them pretty well. You can feel that sweet spot in your motion as soon as you let it go. You know right away whether you had a good throw or not. It’s a lot like throwing a baseball.”

Gragg scouted a friend’s land in St. Charles County to hunt with the atlatl. He spotted a steep hill that deer were using as a bedding area. The atlatl provides some unique challenges to hunting. You have to get much closer than in bow hunting. With a bow and arrow Gragg would keep his shots at about 30 yards.

The scouting expedition gave Paul the information he needed for his October 24th hunt. The buck came off the ridge, crossed the creek, jumped the ledge and stopped right under his deer stand. He waited patiently for the buck to move. The deer finally walked about 8 yards from the tree.

“But I know if you can see their eyeball whatsoever, even from behind, they can see you. They’ve probably got 270-degree vision,” Gragg said.

The Missouri Department of Conservation describes the hunt:

He feared the buck would be gone before he could complete the throwing motion. Gragg waited for the buck to walk behind a tree, and just as the animal’s head was obscured by it, it would give Gragg the chance he needed to make his move with the atlatl. Frustratingly, the buck just milled around a bit. Finally, the animal dropped his head down just enough for Gragg to spring to action. “It looked like he was going to lick his side, but that’s when I had the chance to pull back and throw it,” said Gragg. The dart hit home right at the animal’s shoulder from a distance of 8-10 yards, penetrating 11 inches. The deer stumbled a short distance away and then went down.

As the initial excitement dissipated, Gragg realized he had bagged another fine trophy. The 15-point buck he saw lying on the ground would go on to attain an unofficial Boone & Crockett score of 169 gross and net of 151.

“My goal was not to harvest the trophy that I did, but I just wanted to get a buck under my belt with the atlatl,” said Gragg. “I was in complete shock right off the bat.”

Gragg will have the buck mounted and placed on his living room wall. His friends initially teased him for using the odd weapon. He says they’ve backed off a little bit after he got the 15 point buck.

For more on deer hunting, visit the Missouri Department of Conservation’s website.

Police said they responded to a call for a shooting in the 2700 block of Dunn Road just before 7 p.m.

DUTCHTOWN, Mo. - Craig Williams, 23, was shot and killed by one of his neighbors in Dutchtown on March 26 sparking more controversy in the area around race and police involvement on white on black crime. Neighbors are voicing their concerns.

It was a little over three weeks ago when Williams and his pregnant girlfriend got into a loud argument that attracted the attention of neighbors here in his own front yard. A video surfaced showing Dan Rathmann, a neighbor who lives one building down, walk outside with a rifle and shoot Williams in cold blood.

ST. LOUIS - Police are investigating a shooting in north St. Louis Saturday night. The shooting happened on West Florissant and Adelaide around 7:20 p.m.

Police said an adult male suffered from a gunshot wound to the stomach. He is conscious and breathing.