Jay Walder spoke enthusiastically for over an hour at the KC Tech Council on Wednesday explaining why he wants to build a hyperloop route from Kansas City to St. Louis in the future.

“What I would tell you is that this is my very first trip to visit a state where they have been working on Hyperloop,” Walder said.

At least 10 states are vying for the Hyperloop. The company claims the passenger cabins (referred to as “pods”) could take people from Kansas City to St. Louis in under 30 minutes, at speeds reaching 600 mph.

The Hyperloop is electric and is propelled by a series of high-powered magnets and vacuum pumps within the tube. The passenger pod levitates above the magnets, something the company describes as “mag lev.”

“Rather than having rails, like we think about for a train, we will be levitating above the rail and that’s known as ‘mag lev,'” Walder said.

Walder said Missouri tops his list for the project because it’s the first state to complete a feasibility study demonstrating how, in theory, it could work here.

Secondly, the state’s Interstate 70 corridor provides an ideal east-west path, with a major university at the midpoint.

And lastly, Walder said he’s been impressed by the level of commitment to the project from Missouri’s elected officials. 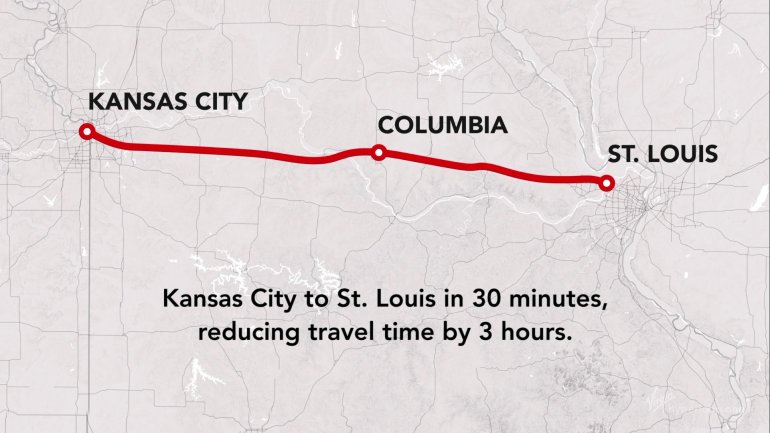 The estimated $7-10 billion cost of the Hyperloop project would be covered by a mix of public and private money.

If all goes well, the Missouri Hyperloop could be operation in 7-10 years.

“We’ll glide seamlessly. It will feel smooth, and you should be able to hold a cup of coffee while we’re going 600 miles an hour,” Walder said.