ST. LOUIS, MO (KTVI) – A police officer shared his first hand account of a deadly night in St. Louis. One person was killed and two were injured on Tuesday night.

Two men were shot in the 8400 block of Newby Street around 10pm. One victim was shot in the stomach and the other was shot in the leg. FOX 2 last reported that the victims were taken to the hospital for treatment.

Shortly after, a person in their late teens, was found shot outside in the 1200 block of McLaran. That victim died.

This St. Louis police officer fills in the details with his blog called, “It’s a tuesday night…”

I was standing over a boy with dark curly hair and big brown eyes.

He was sitting on the floor in a back room of a small, two family house with his back against a wall.

The boy was a handsome biracial kid, but the color of his face seemed off to me. It was too pale or something. I knelt down so our faces were about level and said, “You’re doing great, kid. You’re going to be just fine. I’ll be back in a few seconds, I promise.”

I turned to walk back down the hallway, to the front room where I had entered the house, when the boy spoke again.

“Officer?” The boy asked before I could take a single step away from him.

I turned and noticed that the kid’s big brown eyes were even bigger than they were just three seconds earlier. They’d started to well with tears.

His eyes were pleading with me to do something.

“Make things right again for me.” Is what I read his eyes to be saying.

I waited for him to finish his thought.

“I’ve never been shot before.”

I nodded my head, then smiled at the boy.

“Just hang in there; you’re going to be fine, you hear me?”

He smiled the best smile he could muster as he nodded back to me in response. I had one of the other kids stay and talk with my curly haired friend before I hurried back to the front room.

While the boy with the curly hair and brown eyes was in the back room pondering whatever it is that fifteen year old boys ponder after getting shot in the hip, another boy was laying on his back in the front room, struggling to even take breaths, let alone speak.

He was in much worse shape.

He was also a brown eyed boy, and his eyes were pleading as well. Not to me, necessarily, but to anybody who might make eye contact with them.

This boy’s eyes were afraid.

They scanned left and right, fast at first, and then slower and slower.

He had every right to believe that if something didn’t happen for him soon, he was going to meet his maker. His face made me wonder if that’s what was going through his mind, and I felt sorry for him a little bit.

“Keep talking to him like you’re doing,” I told the girl holding his hand as he drifted closer and closer to death.

The girl on the floor with the boy was entirely too young to be dealing with this sort of bullshit. “Keep holding his hand and talking to him. You’re both doing great.”

I tapped the boy on his shoulder and spoke to him briefly.

“Keep your knees bent, son,” I said to him as he tried to straighten out his legs.

“Keep your knees bent, the ambulance is coming,” I heard the little girl repeat to the boy on his back as I grabbed for my radio. “It’s coming, right?”

I nodded and gave her a thumbs up while I advised the dispatcher that the scene was safe for EMS to enter.

Now the wait was on for these two boys, shot at the same time in yet another act of depravity towards human life over something quite stupid, I’m sure.

The boy in the front room had been shot in his stomach, at least one time. His blood was on the couch and the floor and he was fading pretty quickly with each passing minute.

He was struggling to breath a little bit, but he was doing well enough that I still had hope that his young life would not end right there in that front room.

I looked around the house and felt bad for all the kids I saw. Some were very young, and others were well into their teens.

Their faces showed shock and pain and fear and disbelief and frustration and anger. Some cried while others just stared in disbelief. Some asked if the boys were going to die. Some begged for somebody to tell them the boys would be okay. Still others stepped up valiantly to help their friends or relatives who’d been shot and answer questions about what happened.

I shook my head knowing that it wasn’t just the two boys who will be scarred by this shooting.

Everybody in that house will be.

EMS arrived and swept the two boys off to one of the best hospitals in the country, and I was certain that this was going to be an assault report, not a homicide. 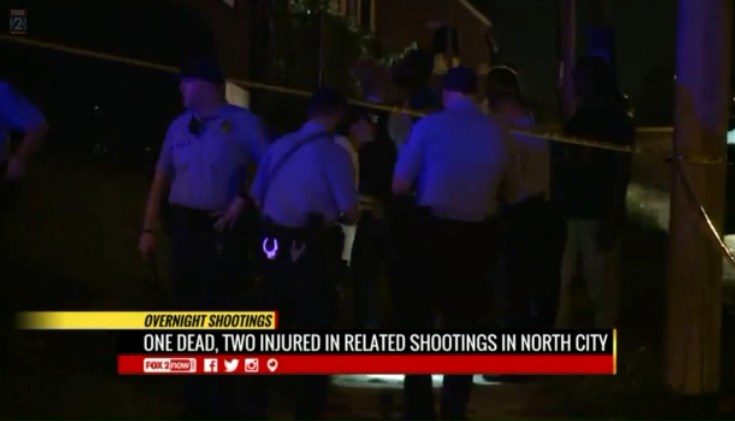 A crowd had gathered near the outer fringes of the crime scene, as they so often do.

Just about the time we had finished talking to witnesses and taking our notes, the crowd suddenly moved around the corner and up the street.

I went to the end of the street and could see a couple of cars stopped in the road with some people gathered around them.

I heard screaming and braced myself for the worst. I thought there was going to be another shooting right there before my eyes.

No shots were fired, but a girl yelled something about somebody being dead.

Officers and onlookers alike ran up the street to where the cars had been.

I would be lying to say I was even a little stunned when I saw what all the commotion was about.

A teenage boy lay dead on his back in somebody’s front yard, with his arm bent upward holding a cell phone in his hand.

The crowd was pushed back and yet more crime scene tape was put up in North St. Louis City.

It’s become old hat to hang police tape around these parts recently, but there we were again.

This boy was tied to the shooting around the corner, and just like that, the whole mess belonged to our Homicide Unit. I don’t envy them at all these days. The workload has to be staggering and their hours long.

As we stood in the heat of the night I made eye contact with another officer and shook my head.

He nodded in understanding.

My partner and I had already helped to find guns in a house during a search requested by the homeowner, we’d been to an aid call to assist officers who had to fight with a drug addict in the midst of a simple car stop, and we had to use a Tazer on a guy who threatened us with a hammer.

That was all before the sun went down and the triple shooting happened.

But everyone did what they had to do.

Evidence was collected and witness statements were taken.

A wailing mother who already had to know the truth was told that her teenage son was dead, and just like that, the crime scene tape came down and everybody left.

Before too long, the spectacle was over and many in the neighborhood wouldn’t know what happened as they slept until they saw it on the news the next morning.

On my way back to suburbia that night, I pulled into a gas station to fill up and get myself a sweet tea.

I wasn’t in my uniform as I filled my cup with ice and eavesdropped on two young municipal officers talking about what a busy night it had been for them up to this point.

“I’ve already handled a car accident report and had to yell at some kids who were dialing 911 while playing on their mom’s phone,” one of the guys boasted to the other, who nodded and said, “Yep, it’s been one of those nights.”

I snickered to myself as I paid for my drink and walked out the door.

Kids playing on the phone and dialing 911 just to see what would happen and not because three of their friends had been shot?

You may remember this blogger from a preivious article. His story of seeing a 6 year-old boy be rushed into the emergency room of Children’s hospital was called, “A senseless death.”

Downtown braces for “sea of red” for first Cardinals …