TIPPECANOE COUNTY, Ind. – A couple accused of abandoning their adopted daughter says the allegations are false and they are the actual victims, according to WXIN.

According to court documents filed earlier this month in Tippecanoe County, Kristine and Michael Barnett adopted a Ukranian-born girl with dwarfism in 2010, but they abandoned her in Lafayette in 2013 when they moved to Canada.

They are now accused of changing the girl’s age from 8 to 22 before they left, and they told the girl to tell other people she looks young for her age, according to WXIN.

They were both charged with neglect of a dependent, and they bonded out of the Tippecanoe County Jail last week.

In an interview with Daily Mail, Kristine says the adoption was a “scam,” and the girl is actually an adult who has made a career out of fooling people into thinking she’s a young girl.

Kristine told Daily Mail she and her now ex-husband agreed to an emergency adoption from an adoption center in Florida. They didn’t know many details about the girl’s background. They just knew she needed a home immediately because her previous adoptive parents gave her up for undisclosed reasons.

Within the first few weeks, Kristine told Daily Mail there were signs their new daughter wasn’t actually a young girl. She had a sophisticated vocabulary, she shunned other children, and she had a period.

They took the girl to a family physician who ordered bone density tests to help determine her actual age. The results suggested she was at least 14, so Kristine says their family began treating her like a teenager. But then Kristine says the girl started making death threats against them. She allegedly tried to poison Kristine and push her into an electric fence, and she attacked a baby.

The Barnett family took the girl to a state-run psychiatric unit to get help. During treatment, the girl allegedly confessed to being much older, and she said she wanted to kill her family. 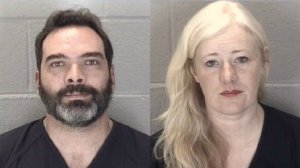 WLFI obtained a doctor’s report that says the Barnett’s daughter is actually an adult. The letter says the girl has “made a career of perpetuating her age façade,” and she has “continued to fool those who have the best intentions.”

They legally changed the girl’s age in June 2012 with the Marion County Superior Court so she could receive appropriate psychiatric treatment.

Kristine told Daily Mail they helped her get a social security number, apply for benefits, food stamps, and an ID.

In August 2012, she was discharged from secure psychiatric care, and she was placed under the supervision of state healthcare provider Aspire Indiana. When she was kicked out of that facility, Kristine says they helped secure housing for her in Lafayette. They continued to pay for her housing when they moved to Canada when their son enrolled at the Perimeter Institute for Theoretical Physics in Waterloo, Ontario.

While in Lafayette, the girl attended classes at the Lafayette Adult Resource Academy. WLFI spoke with a woman who was her colleague and neighbor. She says the girl just stopped going to class one day.

Court documents obtained by WLFI show she was evicted from the apartment in May 2014. By then, Kristine says she vanished and stopped returning her calls. The woman fears she stopped taking her medication and is posing as a child for another family.

“I would have forced her back into treatment, but I couldn’t do that any longer because she was an adult,” Kristine told Daily Mail.

In 2016, a couple applied to become the girl’s guardians, but the Barnetts filed an objection, saying she was an adult. Kristine says witnesses came before the court to testify they were certain the girl was 22. “The judge upheld the original results, and the couple dropped the guardianship petition,” Kristine told Daily Mail.

Kristine says it doesn’t make sense why they’re being charged with crimes now, several years after her age was upheld in court for the second time.

Michael is expected to appear in Tippecanoe Superior Court in Lafayette today. It’s unclear when Kristine will appear in court.

IMPERIAL, Mo. – Families and students from Seckman High School are grieving the loss of one of their own.

Eliana Varela was killed in a single vehicle crash over the weekend. She was 15.

ST. LOUIS – A missing person’s case that captivated the St. Louis area is now getting renewed attention in the form of highly visible electronic billboards. They feature Amanda Jones, who disappeared 16 years ago last August.

ST. LOUIS – For the first time ever, small groups of 10 or less will have the chance to take batting practice on the same field with some of their favorite Cardinals players.

The Fans at Bat experience is heading for Busch Stadium March 21, March 26, and March 27.

To seed or not to seed: Is it too early to start spring plants indoors?