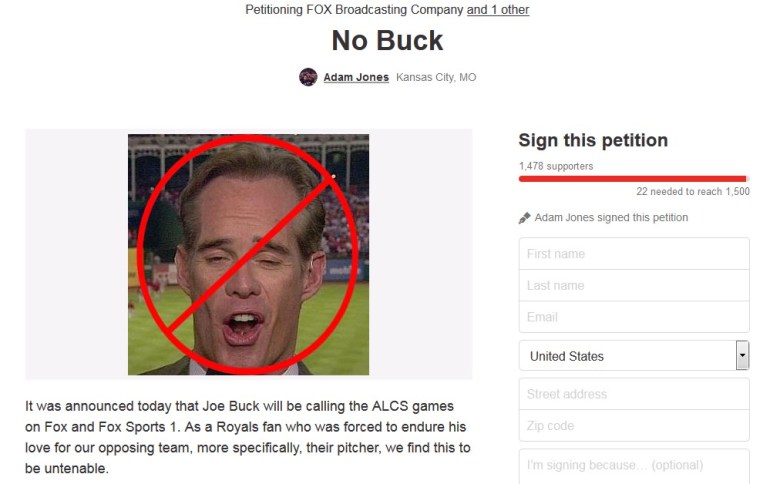 ST. LOUIS (KTVI) – A disgruntled Kansas City Royals fan has an unlikely ally in his push to keep Joe Buck out of the broadcast booth for the upcoming American League Championship Series – Buck himself.

On Thursday, Major League Baseball announced that St. Louisan and multi-time Sports Emmy Award-winner Joe Buck would handle play-by-play duties for the ALCS between the Royals and Toronto Blue Jays. A short time after that announcement, Royals fan Adam Jones launched a petition on Change.org asking Fox to keep Buck off commentary.

Jones’ reason? Bias against the Royals.

Jones tweeted a link to his petition shortly before 1 p.m. and it wasn’t long before the petition came to Buck’s attention.

Good luck. Rooting for you https://t.co/TdV2EapdqE

He would later engage with fans who attempted to give him grief over his perceived bias toward Bumgarner:

Yes. We are registered at Rawlings and Bed Bath And Beyond. https://t.co/KaHEQRNsov

You're right. I don't. It's my dislike of the British https://t.co/6TqZRusE4e

The criticism stems from the longstanding belief from fans across the country that Buck calls games with an implicit bias against their particular team. It’s a claim Buck has embraced in recent years, with amusing results.

ST. LOUIS – For some, the holiday season is the most wonderful time of the year. But during a pandemic that's proven to be anything but wonderful at times, how will consumers react?

Deloitte is out with its 2020 holiday retail survey. More than 4,000 consumers responded.