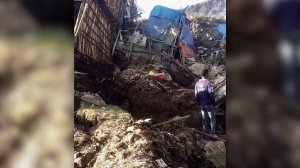 A landslide killed at least 46 people at a waste dump outside Addis Ababa, Ethiopia on Sunday, according to the country’s communications minister, Negeri Lencho.

Officials were still investigating how the landslide at the sprawling Koshe landfill occurred, Lencho said.

He added that security personnel are still searching for people who have been reported missing in the landslide, and that the government is working to resettle the families affected.

A similar landslide occurred in January 2016 at a waste dump in Shenzhen, China, killing 58.

ELGIN, Texas (KXAN) - No entrance with a mask.

A tavern in Elgin, Texas has banned its customers from coming in covered up.

ST. LOUIS – Multiple lanes of Interstate 55 were closed ahead of Wednesday afternoon rush hour because of a tractor-trailer fire just south of downtown St. Louis.

The incident occurred in the southbound lanes of I-55 near Potomac.

Christian Cooper, whose video of a woman calling the police on him while he was birdwatching went viral over the Memorial Day weekend, acknowledged the woman's apology but said her act was "definitely racist."

"I think her apology is sincere," Cooper told CNN's Don Lemon Tuesday night. "I'm not sure that in that apology she recognizes that while she may not be or consider herself a racist, that particular act was definitely racist."

Facts Not Fear: US coronavirus deaths near 100,000

Mississippi officer placed on leave after video of confrontation surfaces

Fauci: Science shows hydroxychloroquine is not effective as a coronavirus treatment

Mississippi officer placed on leave after video of confrontation surfaces