BELLEVILLE, IL (KTVI) – Police in the Metro East are looking into whether a sex trafficking suspect facing charges in Las Vegas is responsible for the death of 6-year-old child in Illinois.  34-year-old Jason Quate faces sex trafficking charges after his wife reported he forced her into prostitution. 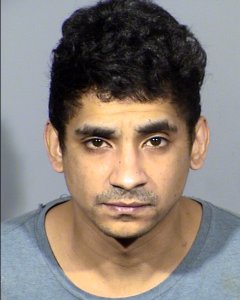 Police say the woman told them Quate was responsible for the death of her 6-year old child in 2015 and told instigators the body could be found in the garage of a Centreville, IL home on Russell Ave.  Police found that body early Tuesday morning.  The victim was so badly decomposed investigators could not immediately determine whether the child was a boy or a girl.

The victim told police she and Quate met in Illinois but had moved to Las Vegas.  She accused Quate of abusing her for years.

“She stated that her husband was extremely abusive and had forced her to go out and solicit herself for prostitution and also was physically abusive to the children,” said Lt. Raymond Spencer, Las Vegas Metropolitan Police.  “She also gave us very disturbing details that she was not allowed to communicate with the children.  She was forced to stay in a bedroom.  The children could not speak with her and also that the children were never allowed to leave the house.”

The surviving children are now in protective custody and did show signs of abuse, according to Las Vegas Police.  The investigation is continuing.  Centreville police have turned the case over to Belleville Police because investigators say it’s believed the child died in Belleville before her body was left in Centreville.

CLAYTON, Mo. — A 43-year-old suburban St. Louis man has been sentenced to 10 years in prison for killing a woman by slamming into her SUV while he was street racing during a night of drinking and smoking marijuana. The St. Louis Post-Dispatch reports that Haven Sooter, of Ladue, was sentenced Friday in the July 2016 death of 73-year-old Kathleen Koutroubis. He pleaded guilty in September to second-degree murder and DWI-repeat offender charges for his role in her death. The man Sooter was racing that night, Scott Bailey, was convicted of second-degree manslaughter in 2018 and sentenced to 60 days in jail and five years of probation. The judge says Sooter got a stiffer sentence because he had a history of drunken driving.

ST. LOUIS - St. Louis County police confirm that they are on the scene of a water rescue at George Winter Park in Fenton.

Witnesses say a small vehicle went into the water.

ST. LOUIS - St. Louis County police report an officer involved shooting atJennings Station Road and Halls Ferry. Police shot a suspect after that suspectpointed a gun at the officers. Police say that two suspects robbed the O’Reilly’s Auto Parts and injured anemployee there. The two suspects took off in a getaway vehicle and then crashedinto a limo taking part in a funeral procession. The suspects got out of the…

COVID restrictions may be paying off, hospital admissions going down

Winter brings the heat with increase of fires; how to safely stay warm

Avoiding the virus: Here’s how to manage your risk

Murder charge in I-170 shooting; police call it a road-rage incident