MARYLAND HEIGHTS, MO (KTVI) – The parents of Brad Bauer call it an overwhelming show of support.  The Lindbergh High School senior suffered a serious injury to his vertebrae during a freak spring break accident.  Brad’s mother said her son was running on a beach in Mexico and dove into the water not realizing a sand bar was underneath.

The leader of the Lindbergh water polo team required emergency surgery.  Brad is now rehabbing at Ranken Jordan Hospital in Maryland Heights.  Laura Bauer said the moment they returned to St. Louis, they could feel support from the community.

“Literally when he was landing his team was finishing up a game and they won the game 18-1, which is his number,” said Laura Bauer.

Teammates have ended several games with an 18 score.  They have also stenciled the number 18 on their chests during every match.

“He’s just close to our heart,” said teammate Casey Natsch.  “That’s just symbolic of how close he is to us and what he means.”

Laura Bauer said her son has had to relearn how to breathe and how to eat.  She’s not predicting what her son’s future holds but is instead taking one day at a time.

Parents have helped sell t-shirts and wrist bands to help with medical expenses.  Friends also stood outside Brad’s hospital window in the Central West End to show their support.  More recently they visited Brad at Ranken Jordan Pediatric Bridge Hospital where he continues to rehab.  The visit came during prom and everyone was dressed in their coat and ties. 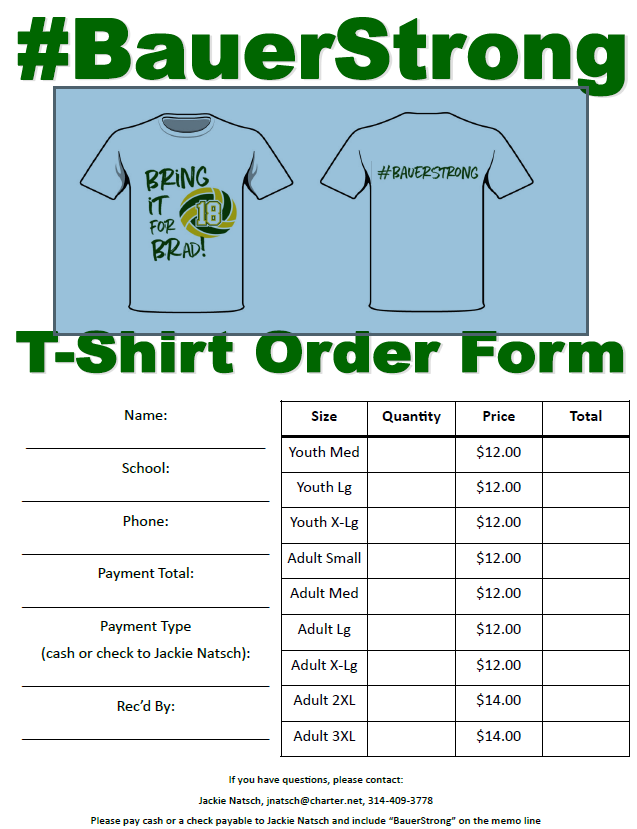 “It’s how we’re getting by, knowing we have so many people who are taking care of us,” said Lauer Bauer.

“You never really realize the support you have behind you unless something like this happens,” said Mark Bauer, Brad’s father.

Brad said he appreciates the support and wants his team to win a state championship while he continues to work hard at rehabbing.  Brad led his team to two state finals so the Flyers do have lofty goals.

Teammate Mason White said the entire team’s thoughts are with Brad and his family.

“We’re still thinking about him and caring about him,” said White.  “Even though he’s not here with us, he is with us.”

Mark Bauer said he’s also received support from the business he helps operate.  He said they have helped by giving him enough time to be with his son.  He also praised the surgeon in Mexico who operated on Brad just hours after the injury and the staff at Barnes Hospital for helping with the transition to Ranken Jordan.  Mark Bauer has also received support from Brad’s older brother who returned home from college to be by his brother’s side.

Lindbergh will be hosting a water polo tournament this weekend.  T-shirts and wristbands will be sold during those matches.  Anyone wanting more information can email Lindbergh Varsity Water Polo Coach Andy Butler at abutler@lindberghschools.ws or Jackie Natsch at jnatsch@charter.net.