JEFFERSON CITY, MO –Lieutenant Governor Mike Parson says he can and will expel State Senator Maria Chappelle-Nadal from the Missouri legislature if she doesn’t resign following comments made about President Trump on Facebook.

Parson, who’s position also makes him president of the Missouri Senate, is calling for the expulsion Nadal under Article 3 of the Missouri Constitution. But he hopes she will do the responsible thing first. 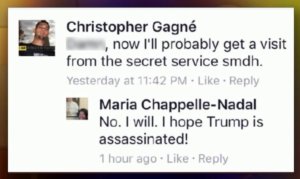 Early Thursday morning, Democratic Sen. Chappelle-Nadal wrote a Facebook comment in response to a post that suggested Vice President Mike Pence would try to have Trump removed from office where she said “I hope Trump is assassinated!”

The comment was later deleted. Chappelle-Nadal later told FOX 2 says she didn’t mean what she posted, but was frustrated with the president’s reaction to the violence last weekend in Charlottesville, Virginia. She has said she has no intention of resigning over the comment.

“To me there is ways to remove her from office but what I think she should do is take responsibility for her actions in state of Missouri and resign as a state senator,” said Parson.

Parson adds that her Facebook post hoping that President Trump would be assassinated, takes things to a new level.

“I have the ability and right to call on my fellow senators to have her expelled from the Missouri Senate, which I plan to do if she does not resign by the veto session.”

That veto session starts September 15, 2017. Once it does, senators would call for a special session to vote on Nadal’s expulsion. They would need a two-thirds majority of the vote to succeed.

“I would be disappointed if Missouri senators of this state did not vote to expel her from senate. I do not think that’s the message we want to send to people of Missouri.”

As far as the historical significance of what Parson intends on doing, he says they are checking but don’t think this has ever been done in Missouri. However, it has been used in other states.

“You’re held to a higher standard if you like it or not. That is what we do. If we don’t hold ourselves to that higher standard, we’re doomed to fail.”

Senator Chappelle-Nadal said she hopes the President is killed. Republicans and Democrats have called on her to resign. Her response: “Hell no.” Last night, in an interview, she refused to apologize twice. If she will not resign, the Senate can vote to remove her. I believe they should.

Dress designer stood girls up on prom day in St. …

East St. Louis residents will go another summer without …

Families of those shot by police rally in St. Louis

Man sentenced to life in deaths of Missouri mother, …

Teen who died of cancer not honored at graduation