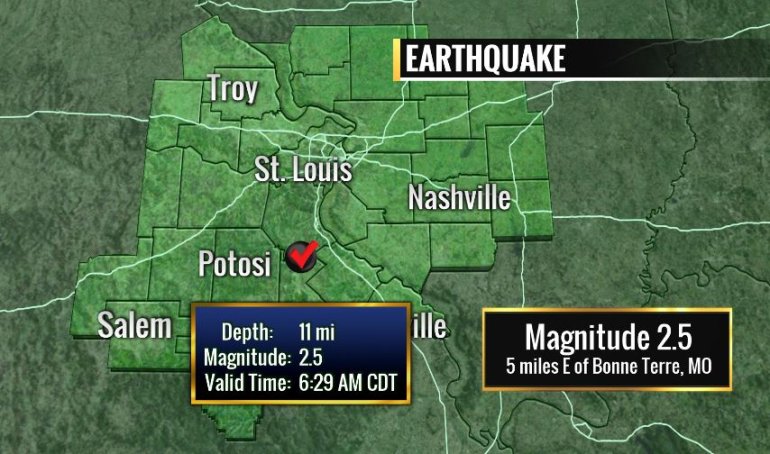 BONNE TERRE, MO (KFVS) – A small earthquake shook the New Madrid seismic zone nearly 60 miles from St. Louis Tuesday morning. The United States Geological Survey reports the magnitude 2.6 quake hit about five miles east northeast of Bonne Terre, Missouri just after 6:30am.  Let the USGS know if you felt it.  It will help firm up details in their report.

It was a small quake. But, several earthquakes have rattled the same area in 2017.

The USGS describes the seismic zone as:

“The New Madrid seismic zone of southeast Missouri and adjacent States is the most seismically active in North America east of the Rockies. During the winter of 1811-1812 three very large earthquakes devastated the area and were felt throughout most of the Nation. They occurred a few weeks apart on December 16, January 23, and February 7. Hundreds of aftershocks, some severely damaging by themselves, continued for years. Prehistoric earthquakes similar in size to those of 1811-1812 occurred in the middle 1400’s and around 900 A.D. Strong, damaging earthquakes struck the southwestern end of the seismic zone near Marked Tree, Arkansas in 1843 (magnitude 6.3), and the northeastern end near Charleston, Missouri in 1895 (magnitude 6.6). Since 1900, moderately damaging earthquakes have struck the seismic zone every few decades. About twice a year people feel still smaller earthquakes that do not cause damage.

WILDWOOD, Mo. – Amid all the grim coronavirus news in recent weeks, FOX 2 has found a bright spot. A woman's idea to allow in-person visits at area nursing homes for the first time in 8 months is now a reality.

“Most people go home to their families and loved ones every night,” said Kimberly Wyatt, administrator for Ballwin Ridge Health & Rehabilitation. “They take (it) for granted. There are others who don’t get to see their families because of the COVID situation. [It’s very tough] Especially with the holidays coming.”

ST. LOUIS - On Monday night, reports came in of snowflakes and sleet pellets in parts of Missouri and Illinois. It is a big reminder that now is the time to prepare for winter weather impacts on the roads. No one wants to be stranded in the cold if you hit a traffic jam or have a breakdown.

“Now is the time you want to get everything ready. You don’t want to wait until we have a big storm coming in. One: because if you wait, the stores are probably going to be sold out of everything you need. And two: it’s just good to have this stuff prepared in your vehicle ahead of time,” said Nick Chabarria, a spokesperson with AAA’s St. Louis regional office.

ST. LOUIS – The Annie Malone Thanksgiving dinner is a chance for students at Emerson Therapeutic Academy in The Ville neighborhood to give thanks and get an early holiday meal.

“We’re doing a Thanksgiving dinner here and at our crisis facility and at our residential treatment facility,” said Sara Lahman, CEO of Annie Malone Children & Family Services. “Then we’re doing a turkey giveaway; about 27 turkeys for the children and families we serve in our community.”