Skip to content
Breaking News
Breaking News
Map of St. Louis area COVID-19 cases – MO: 1,026 deaths/ 22,830 cases IL: 6,987 deaths/ 144,882 cases.
This is an archived article and the information in the article may be outdated. Please look at the time stamp on the story to see when it was last updated.

NEW MADRID, MO – A magnitude 2.7 earthquake shook southeast Missouri Monday at around 9:30am.  The USGS reports that the epicenter was west-southwest of New Madrid.  The region is known to be an active zone for earthquakes. 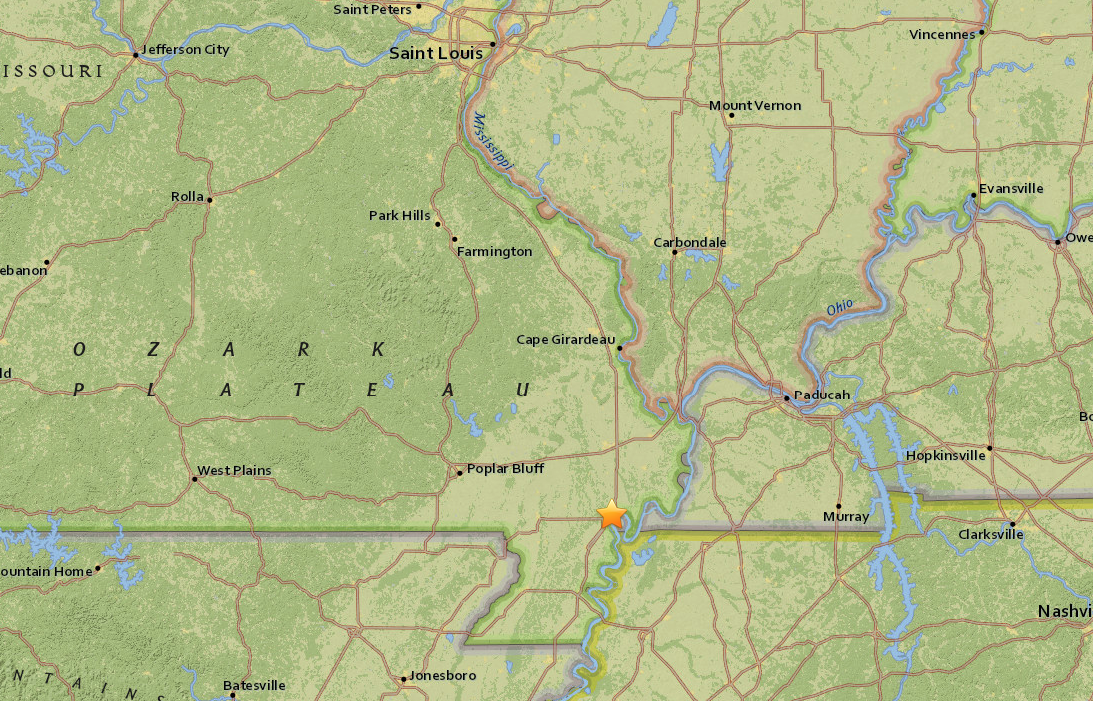 More regional information from the USGS:

The New Madrid seismic zone of southeast Missouri and adjacent States is the most seismically active in North America east of the Rockies. During the winter of 1811-1812 three very large earthquakes devastated the area and were felt throughout most of the Nation. They occurred a few weeks apart on December 16, January 23, and February 7. Hundreds of aftershocks, some severely damaging by themselves, continued for years. Prehistoric earthquakes similar in size to those of 1811-1812 occurred in the middle 1400’s and around 900 A.D. Strong, damaging earthquakes struck the southwestern end of the seismic zone near Marked Tree, Arkansas in 1843 (magnitude 6.3), and the northeastern end near Charleston, Missouri in 1895 (magnitude 6.6). Since 1900, moderately damaging earthquakes have struck the seismic zone every few decades. About twice a year people feel still smaller earthquakes that do not cause damage.

Earthquakes everywhere occur on faults within bedrock, usually miles deep. The earthquakes of the New Madrid seismic zone occur within a large network of faults called the Reelfoot rift. The rift formed about 500 million years ago, when this region was stretched in the northwest-southeast direction. Along a northeast-southwest zone at least 70 km (40 mi) wide and 500 km (300 mi) long, the rocks in the rift were slowly dropped down about 1-2 km (1 mi) along some of the faults. Now the region is undergoing east- west shortening, and the ancient faults of the Reelfoot rift are being reactivated to generate earthquakes. Today the Reelfoot rift and the New Madrid seismic zone are 2,000 km (1,200 mi) from the nearest plate boundary, which is in the Caribbean Sea.

The network of faults in the seismic zone is buried beneath hundreds to thousands of feet of sand and mud. Four of the largest faults are recognized as alignments of abundant small earthquakes, and movements along two of these faults dammed rivers and created lakes during the earthquakes of 1811-1812. A few more deeply buried faults were detected during oil and gas exploration, and a few small faults are known from geologic mapping. However, many earthquakes occur away from the few known faults, so there must be additional, unknown faults that can generate earthquakes in the seismic zone. Accordingly, the best overall guide to seismic hazard in the New Madrid seismic zone is the earthquakes themselves.

(WIVB) - The parents of a North Tonawanda girl who was attacked by a group of other middle-school aged girls on camera last week have shared a statement thanking a pair of boys who stopped the assault.

The identities of the victim and the attackers were not released by police due to their ages, but the parents of the victim, Dawn and Joseph DellaValle, named her in their statement.

Folks from around the area, either in support or opposition of Columbus, visited the statue throughout the day. A wreath was placed beside the statue later Saturday morning.

JOLIET, Ill. - More than 700 nurses at Amita Health St. Joseph Medical Center Joliet have gone on strike after negotiations between the hospital and the nurses union failed to result in a contract.

The strike over pay and issues related to the safety of nurses began Saturday morning. In preparation for a possible strike, Amita Health said it would cancel non-urgent surgeries, bring in licensed nurses and, if necessary, prepare to have ambulances bypass the hospital.

Arrest made in February infant homicide

Man shot and killed in Dutchtown on Fourth of July