Skip to content
Breaking News
Breaking News
Map of St. Louis area COVID-19 cases – MO: 1,026 deaths/ 22,830 cases IL: 6,987 deaths/ 144,882 cases.
Live Now
Live Now
Expect US Rally in Central West End
Watch Now
Watch Now
Live video of FOX 2 News
This is an archived article and the information in the article may be outdated. Please look at the time stamp on the story to see when it was last updated. 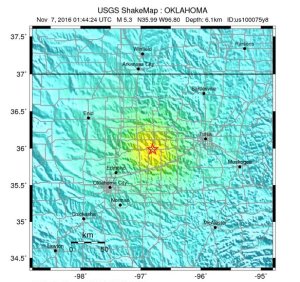 CUSHING, OK – A magnitude 5.0 earthquake struck Sunday evening near Cushing, Oklahoma.  It rattled several surrounding states in the U.S. heartland, according to the US Geological Survey.  The quake occurred at 7:44pm CST.

A recent report released by the USGS showed that people in parts of Texas and Oklahoma now face similar ground-shaking risks from human-induced activity, such as fluid injection or extraction, as residents face from natural earthquakes in California.

The agency outlined the risk of these so-called “induced” earthquakes, noting that Oklahoma City and the surrounding region face a 5 to 12% chance of damage from an earthquake in 2016.

Magnitude of Cushing, OK earthquake re-calculated at 5.0. I've updated our @FOX2now graphic. Some damage, but no injuries in Cushing. pic.twitter.com/lUJx2PgPq2

With earthquakes in the central and eastern United States, “the ground is softer, so the seismic waves have a much farther travel distance then an earthquake in California or Nevada,” said Robert Sanders, USGS geophysicist.

FOX 2 viewers sent the following messages to the station:

More information about the quake from the USGS:

Most of North America east of the Rocky Mountains has infrequent earthquakes. Here and there earthquakes are more numerous, for example in the New Madrid seismic zone centered on southeastern Missouri, in the Charlevoix-Kamouraska seismic zone of eastern Quebec, in New England, in the New York – Philadelphia – Wilmington urban corridor, and elsewhere. However, most of the enormous region from the Rockies to the Atlantic can go years without an earthquake large enough to be felt, and several U.S. states have never reported a damaging earthquake.

As is the case elsewhere in the world, there is evidence that some central and eastern North America earthquakes have been triggered or caused by human activities that have altered the stress conditions in earth’s crust sufficiently to induce faulting. Activities that have induced felt earthquakes in some geologic environments have included impoundment of water behind dams, injection of fluid into the earth’s crust, extraction of fluid or gas, and removal of rock in mining or quarrying operations. In much of eastern and central North America, the number of earthquakes suspected of having been induced is much smaller than the number of natural earthquakes, but in some regions, such as the south-central states of the U.S., a significant majority of recent earthquakes are thought by many seismologists to have been human-induced. Even within areas with many human-induced earthquakes, however, the activity that seems to induce seismicity at one location may be taking place at many other locations without inducing felt earthquakes. In addition, regions with frequent induced earthquakes may also be subject to damaging earthquakes that would have occurred independently of human activity. Making a strong scientific case for a causative link between a particular human activity and a particular sequence of earthquakes typically involves special studies devoted specifically to the question. Such investigations usually address the process by which the suspected triggering activity might have significantly altered stresses in the bedrock at the earthquake source, and they commonly address the ways in which the characteristics of the suspected human-triggered earthquakes differ from the characteristics of natural earthquakes in the region.

CLEVELAND (WJW) - Cradling his baby, a Cleveland man sitting next to a picture of his wife said they had a great life together until they both fell ill with COVID-19.

Sierra Warith, 23, was pregnant with her second child when she and her husband, Ramath Mzpeh Warith, who works at the RTA, tested positive for the virus in May.

BIRMINGHAM, Ala. (WIAT) -- Four people have been injured in a shooting at the Riverchase Galleria in Hoover Friday afternoon, according to the Hoover Police Department.

Hoover PD says they received calls of shots fired at the mall just after 3:18 p.m. All four victims have been transported to local hospitals with unknown injuries and conditions.

ST. LOUIS - A rally from organizers Expect US is happening Friday evening in response to a Central West End couple pointing firearms at protesters last weekend.

The protesters were on their way to St. Louis Mayor Lyda Krewson's home Sunday, June 28 after she read people's full names and addresses during a briefing on Facebook Live.

Arkansas governor will allow cities in to pass mask mandates

CAUGHT ON CAMERA: Father and son respond to driver having medical emergency behind the wheel