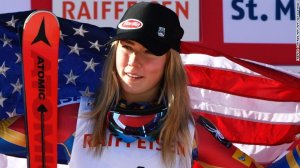 At just 21, Mikaela Shiffrin has already achieved more than most professional skiers do in a lifetime.

In St. Moritz Saturday, Shiffrin became the first woman since Germany’s Christl Cranz back in 1939 to win three slalom World Championship golds in a row.

The US star had previously clinched the title at the 2013 and 2015 World Championships.

“People tell me about records and history and I’m starting to realize it’s amazing, especially for ski racing in the US. But today I wasn’t thinking about that. I was just trying to ski fast,” Shiffrin told CNN’s Alpine Edge.

The youngest ever Olympic slalom champion — Shiffrin was 18 when she won in Sochi in 2014 — admits past success brings its own sort of pressure.

“In a way, once you win, if you don’t win again it’s sort of like you’ve lost something,” she said prior to competing in Switzerland.

“After winning two World Championships, an Olympic gold and a bunch of World Cups… not winning makes me feel like I’ve done something wrong.

On Thursday, she became the first American woman since 2005 to medal in giant slalom when she clinched silver behind winner Tessa Worley of France.

Success at such a young age has been forced Shiffrin to acclimatize to life in the spotlight. However, she remains grounded despite the success.

In December Shiffrin celebrated a World Cup slalom win in Killington, Vermont, by embracing her 95-year-old grandmother and covering her elderly relative with a jacket to ensure she kept warm.

Such touching gestures, on top of her impressive race results, have won her many admirers.

“That’s one of the things that I didn’t expect, the fan base,” she said.

“When I first started on the World Cup tour, I saw this group of people (with a sign) and it said ‘Mikaela Shiffrin Fanclub’ and I was like ‘who’s that?’ I went home and asked my parents is somebody paying these guys to hold up that sign?”

The attention is perhaps most intense in the alpine countries that make up Europe’s winter sports heartlands.

“That win (in 2013) was huge and I realized how big ski racing can be, especially in countries like Austria, Germany (and) Switzerland. Instead of football they worship ski racing. My first win was in Austria and I didn’t sleep until midnight the next day.”

The scale of such challenges seem to have little effect on the calm and collected Shiffrin.

(KTLA) - Amazon trailers went up in flames as a blaze at a commercial building in California sent smoke towering into the air Friday morning, footage shows.

“Customer orders will be fulfilled from other locations; we expect minimal customer impact,” the company said in a statement to KTLA, explaining workers were evacuated from the building.